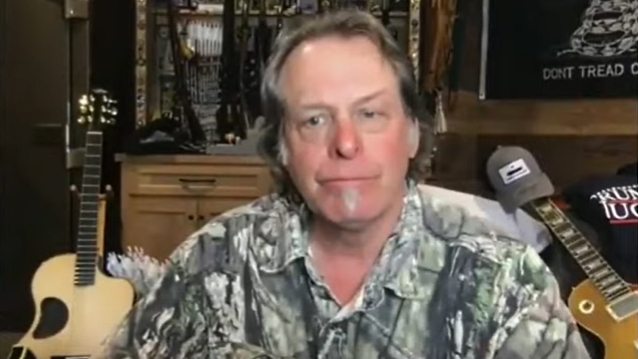 Ted Nugent has praised Tucker Carlson as "a brave, ass-kicking, wall-destroying, lie-crushing guy" whose program should be watched "daily."

Nugent discussed Fox News' highest-rated anchor, who has been repeatedly accused of anti-immigrant and racist comments, during the May 11 episode of his Internet TV show "Ted Nugent's Spirit Campfire".

Ted said (as transcribed by BLABBERMOUTH.NET): "I hope everybody, if you don't watch Tucker Carlson live, you've just gotta record it and go back. He may be the last source of evidence-saturated commentary. Not just commentary and then move on to a commentary, commentary and then move on… No. He shows footage, he shows the doctors saying the words that he claims they said. They don't have to make up words like the media does about me — they just put quotations around words that never came out of my mouth — but Tucker goes and finds the source; he shows the scientific paperwork.

"You've gotta watch Tucker Carlson, and when he has [conservative social media figure] Candace Owens on… The Democrats call Candace Owens a white supremacist. She's black!" he continued. "You've gotta see the insanity that is exposed on Tucker's show when he has Candace Owens on. He had a review of a New York Times science writer for many, many years that was identified with evidence that is inescapable that [the nation's top infectious disease expert] Dr. Fauci — this Faucimonster, this lying, scamming, criminal, Chinese communist Dr. Fauci… Watch Tucker Carlson tonight and look at the evidence that Fauci is responsible for the Wuhan virus running rampant. And it was designed to go from people to people in the most non-stoppable way. And, again, it wasn't just Tucker commenting, and Ted Nugent is not just commenting — he's got them on film admitting it and the scientists reviewing it and admitting to the evidence.

"So, I'm just a guitar player, but I so care that I dig deep — and I hope that everybody at the 'Spirit Campfire', as often as possible, I hope daily, digs deep, and I think the place to start is with Tucker Carlson's show. What a brave, ass-kicking, wall-destroying, lie-crushing guy this guy is. A real salute to Tucker Carlson."

According to SILive, Polifact, a fact-checking web site that rates the accuracy of claims by elected officials and others on its Truth-O-Meter, has labeled a number of Carlson's statements False, Mostly False, and "Pants On Fire" false. In a court case last year, U.S. District Judge Mary Kay Vyskocil's opinion, leaning heavily on the arguments of Fox's lawyers, said the following: "The 'general tenor' of [Tucker Carlson's] show should then inform a viewer that [Carlson] is not 'stating actual facts' about the topics he discusses and is instead engaging in 'exaggeration' and 'non-literal commentary.'"

Last month, Nugent talked about the darkest days of his battle with COVID-19, saying that he had "never been so scared" in his entire life. The 72-year-old pro-gun activist, who had previously claimed the virus was "not a real pandemic," said: "It was really scary. I didn't think I was gonna make it. I literally couldn't function for about 20 hours, and then they came and they rescued me… The six-foot-two, 225-pound headache [this time] was like nothing I have ever experienced. I mean, from my tip of my toes to the top of my hair, I literally was dizzy and weak and struggled to get up to go to the bathroom. And I would lay in the bathtub a couple of times a day with the water as hot as I could take it just to divert."

In the past, Nugent, a staunch Trump supporter, had referred to the novel coronavirus as a "leftist scam to destroy" America's 45th president. He had also repeated a narrative pushed by conservative media and disputed by health experts that suggests the official death count from the coronavirus is inflated.