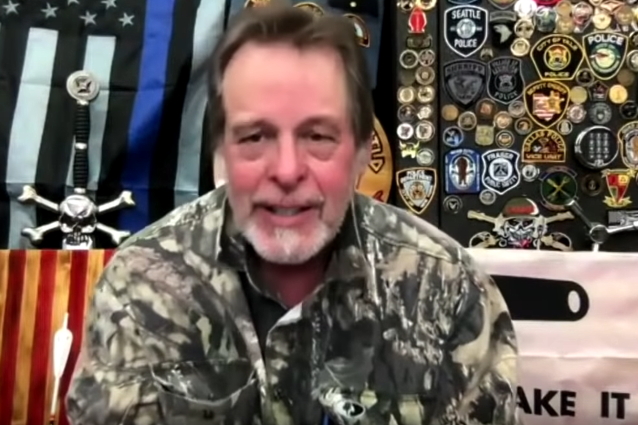 Ted Nugent has expressed skepticism about the effectiveness of face masks during the pandemic and has mocked those who wear them, despite that both the CDC and World Health Organization have urged their universal use.

In a Facebook Live video recorded earlier today, Nugent said: "Some lady stopped me the other day at the hardware story, and I wasn't wearing a mask. 'Cause I have a permit. Here's my permit to not wear a mask. [Extends middle finger to the camera] Because the mask thing is a lie. Oh my God. Who doesn't know this? When you wear a heavy-duty mask during the winter and you breathe, you can tell that your breath ignores the mask. [Laughs hysterically] Who doesn't know this shit?

"But anyhow, this lady said, 'I'm so glad you're not wearing a mask, Ted, because you're much too pretty to cover that pretty face.' And I went, 'Yeah, no shit.'," he added.

Ted, who moved to Texas from Michigan in 2005, also once again repeated the unsubstantiated claim that last year's presidential election was a fraud. He said: "We're gonna somehow get a fair election. We're the shit-kickers who believe in God, family, country, individual rights that we will finally get our votes counted.

"Joe Biden is a zombie," Nugent added. "Watch this poor, pathetic, demented, lifetime-power-abusing punk try to form a sentence. Are you kidding me? Who looks at Joe Biden and goes, 'That's the leader of my country.'

"And by the way, the Biden family — you soulless monsters subjecting Joe Biden to public ridicule every day by allowing him to make a complete ass of himself. Worse than Joe Biden is his family and his fellow Democrats who don't flinch pushing the man forward to make an idiot and an ass of himself every day for public ridiculte in his demented, braindead, soulless condition."