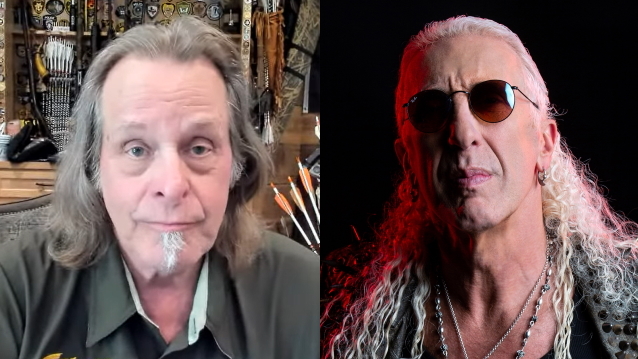 Ted Nugent has once again blasted Dee Snider for seemingly celebrating the fact that the controversial rocker was diagnosed with coronavirus.

After Nugent went public with the fact that he was battling COVID-19 in April 2021, TESTAMENT guitarist Alex Skolnick shared a couple of headlines highlighting the fact that Nugent was previously spreading false information about the pandemic, only to contract the virus himself and become severely sick. Snider, who tested positive for COVID-19 last summer despite the fact that he was fully vaccinated, shared Skolnick's tweet and included the following message: "It's just...so...beautiful!"

Nugent, an outspoken conspiracy theorist who has refused to take the vaccine, touched upon Snider's comment during his May 20 YouTube livestream. He said (as transcribed by BLABBERMOUTH.NET): "Dee Snider — a nice guy, I thought. But if you make fun of someone getting sick, you're not a nice guy, Dee. What happened to you? We always got along. And then you celebrated my sickness. And you don't know how rotten that is? Why don't you know how rot… Dee, you're not a rotten guy.

"What caused that nasty, nasty hate? 'Well, you said bad things about [former U.S. secretary of state] Hillary Clinton.' Because Hillary Clinton destroys everything she touches," Nugent explained. "She's a dishonest, tyrannical, oath-violating criminal. That's not mean; that's the truth. 'Well, you said [she should] suck my machine gun.' Dee, Dee, my friend — have you ever said 'F.U.' to someone but not really intentionally pursuing sex with that person? Are you kidding me? Do you think I would ever want her lips anywhere near my firearms? You're not aware of street terms? You must be. You must be. 'Cause I understand you're a good father and a good husband. So why were you such a prick at that moment? I just don't get it."

Nugent previously addressed Snider's comment about his COVID-19 battle in a December 2021 interview with Sofa King Cool. At the time, Ted said: "What is that thought process? [Dee] and I have been friends. What horrible human impulse — horrible, rotten, hateful, soulless impulse — must exist in horrible people to take pleasure and celebrate a fellow man's illness. It went viral across the globe where the left said I got what I deserved. How did I deserve that? 'Well, you called it a hoax.' I never, ever used the 'H' word. I never used word 'hoax'; I never called it a hoax. I called [top infectious diseases doctor Anthony] Fauci a scam artist. I called [House Speaker Nancy] Pelosi, Fauci and [former U.S. president Barack] Obama at the Wuhan lab with our tax dollars to cultivate a communist Chinese weaponized virus? That's not a Ted Nugent supposition. We have the footage. And they took glee.

"A guy like Dee Snider — how can you abandon your humanity and take pleasure in another person's sickness?" he continued. "What a horrible, horrible manifestation of societal human abandonment. So, I pray for the Dee Sniders to allow themselves to be that rotten. I expect Marxists and leftists, but not a Dee Snider and not otherwise reasonably decent people, 'cause he's a good guy. But, boy, he really showed a rotten, horrible side when he did that. And it didn't impact me at all because I know that there's always been bad, nasty people.

"So, if Dee Snider's watchin, Dee — I think it was a hiccup; I don't think that's what you are," Ted added. "But when you're ready to be a man and apologize, I will expect and accept your apology, because that was a rotten moment in an otherwise nice life.

"How do you just decide to be a prick one day? It's sad."

Nugent went on to say that wishing people ill based on party politics or any other factors is never acceptable. "So, the little boys and girls that are getting leukemia, do they deserve that?" he said. "Are you kidding me? I suppose when someone gets cancer and they keep smoking and drinking and eating food that isn't food, I suppose at some point you do deserve that, because you know that that's bad for you and you keep doing it; that's when you deserve something. But what kind of mindless idiot would take pleasure in anybody, even if they hate my politics… And if you hate my politics, you've gotta be a real dirtbag, 'cause my politics are freedom; my politics are self-evident truth based in God-given individual rights, God, family, country, the Constitution, Bill Of Rights, Declaration Of Independence, work ethic, law and order, the Ten Commandments, the Golden Rule. You have a problem with that? That's the foundation of America. So if you have a problem with Ted Nugent's politics, you are a bad, bad person."

Ted continued: "Even a guy like Tom Morello, who I love, and [Carlos] Santana, who I love, wearing a Che Guevara shirt? So you're a supporter of genocide? You're a supporter of a guy that would have killed you. Che would have killed Santana and Tom Morello if he had a chance. What the fuck? How many mind-altering chemicals do you have to consume to be that fucking stupid? What the fuck? Wearing a Che Guevara shirt is like wearing an Adolf Hitler shirt. What is wrong with these people? You can't explain it. You have to literally take your soul and put it in the garbage to be that stupid."

Last October, Nugent appeared on "Off The Record" where he once again said that he wouldn't take the COVID-19 vaccine because the shots that were available in the United States were developed in less than a year are probably fake.

In April 2021, Nugent talked about the darkest days of his battle with COVID-19, saying that he had "never been so scared" in his entire life. The 73-year-old pro-gun activist, who had previously claimed the virus was "not a real pandemic," said: "It was really scary. I didn't think I was gonna make it. I literally couldn't function for about 20 hours, and then they came and they rescued me… The six-foot-two, 225-pound headache [this time] was like nothing I have ever experienced. I mean, from my tip of my toes to the top of my hair, I literally was dizzy and weak and struggled to get up to go to the bathroom. And I would lay in the bathtub a couple of times a day with the water as hot as I could take it just to divert."

Ted also said that he was being treated for COVID-19 by a group of doctors who made a video in 2020 calling for the use of hydroxychloroquine to battle the novel coronavirus, despite warnings from public health experts. Nugent went on to detail his clinical management of COVID-19, saying he was taking hydroxychloroquine, "a proven drug for 65 years," as well as ivermectin, "another proven drug."