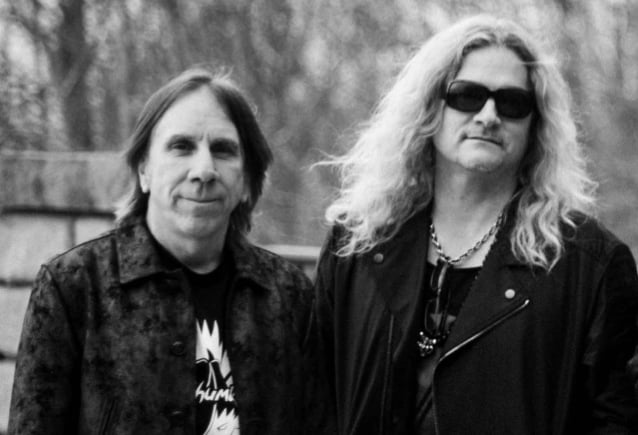 TESLA guitarist Frank Hannon says that he doesn't know when drummer Troy Luccketta will return to the band.

Last month, Luccketta announced that he would "take a little time from the road" to spend with family and friends. He is being temporarily replaced at TESLA's gigs by Steve Brown, the younger brother of former DOKKEN drummer Mick Brown.

Frank discussed his longtime bandmate's absence from TESLA's gigs during a September 29 appearance on SiriusXM's "Trunk Nation With Eddie Trunk". He said (as transcribed by BLABBERMOUTH.NET): "When we got hit with COVID super hard in August, everybody got sick, including Troy. And when we all finally got over it, I think Troy realized, 'You know what, man? I just don't wanna go on the road. I need more time.' So he's taking the time that he needs to pull it together, man. A lot of people are feeling that way. And I don't blame him. Shoot, man, he's in his 60s, he's been touring with us for 35 years. So he's taking a break. And I don't know when he's gonna come back. And thank goodness, he hooked us up with our old friend Steve Brown, who's Mick Brown from DOKKEN — you know, 'Wild' Mick Brown — it's his little brother. And man, Steve — I have to be honest — is bringing a lot of positive energy to the band, and we're having a great time with Steve. Whenever Troy is ready [to come back], we'll talk about that then, but right now Steve Brown is really kicking ass for us. And the shows are going great."

According to Hannon, this isn't the first time that Steve Brown had played with TESLA. "Steve has sat in with us before, when Troy's needed one or two days off here and there," he explained. "Whenever we've had family emergencies, there's been times where someone sat in for me — Howie Simon sat in for me before. Steve Brownhas played with us before, but this is the first time it's been to this extent of time. And it's gonna go at least until the end of this touring season of this year, Steve will be playing with us in our shows. He's a great guy, man, and he's bringing a really good vibe to the show."

TESLA played the first two shows of its summer 2021 tour — August 5 in Grants Pass, Oregon and August 6 in Grand Ronde, Oregon — without Frank. Filling in for him was Simon (JEFF SCOTT SOTO, GRAHAM BONNET, STRYPER),who previously stood in for Hannon in September 2018.