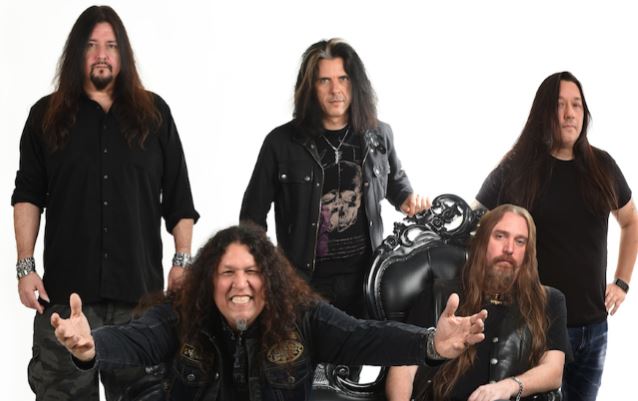 Andrew "Schizodeluxe" Massie of Australia's The Rockpit recently conducted an interview with guitarist Eric Peterson of San Francisco Bay Area metallers TESTAMENT. A couple of excerpts from the chat follow below.

The Rockpit: Just been having a preview of the new [TESTAMENT] album ["Brotherhood Of The Snake"] recently and it's killer stuff. I love it! You guys must be super-happy with how these songs have turned out. It has all the trademark signature sounds in there; it has an old-school feel, but with a modern fresh take on it. How's the feeling with the band at the moment? How do you feel about these new songs?

Eric: Yeah, I've lived with it for a while now and, of course, when you're mixing it, you listen to it a lot, so I stopped listening to it for a while and now that we're getting ready to go on tour, I've been listening to it in the car and pretty happy with it. I think it came out really clear and strong with modern production, it definitely sounds like TESTAMENT but it's got this new energy that I love and I just love everything that everybody did on it. The bass, the guitars, the solos, the vocals, the drums, and there's nothing that I'm not happy with. I have to say that most of the records, I'm definitely happy [with], but there's always something like, "Oh we'll get that next time." So on this one everything is there, so I'm pretty stoked with it.

The Rockpit: Was that one of the main goals this time, making sure that you didn't leave anything out?

Eric: Ideally that would have been great. [Laughs] But, yeah, the pressure was definitely on; we didn't have the luxury of second-guessing anything. We had a very small window to make this happen, and not everything was completed in that window, so our backs were against the wall on some of the songs, but through hard work and perseverance, we prevailed on making the songs come to life and doing it justice. There's definitely not a song on there that where, "Man, if we just had a little bit more time," or "Why did we do that? Maybe we shouldn't have done that." When I listen back to it, I definitely think, "Wow!" I guess pressure sometimes is the key to making things right and not second-guessing everything.

The Rockpit: You mentioned heading out on tour and playing these songs live. Did you think about the live aspect of it when you were sitting down and recording them?

Eric: Yeah, I mean, most of the time, for me, I usually start off, as the main songwriter of the band, I tend to definitely envision a crowd in front of me. I'm kinda silly like that, I'm kind of a fan that way; I want to be a fan of what I hear. When I listen to it, I'm, like, "Is this going to hit or not?" I'm not trying to write a song that's going to be on the radio. It's gotta be coming from, "Does it give me that metal feeling? Is it true metal?" Just like I felt when I heard "Rapid Fire" by JUDAS PRIEST or "Neon Knights" by BLACK SABBATH, there's just certain songs that you've heard as a kid just like the way they hit. I always liked the more epic, obscure songs by bands. Whereas with JUDAS PRIEST, for instance, a lot of people like "Living After Midnight" or "Breaking The Law", I preferred "Steeler" or "Rapid Fire" — just the more darker songs, I guess. So that's kind of [how it turned out] on this record. As I did most of the writing, I think the riffs kinda came out like that.