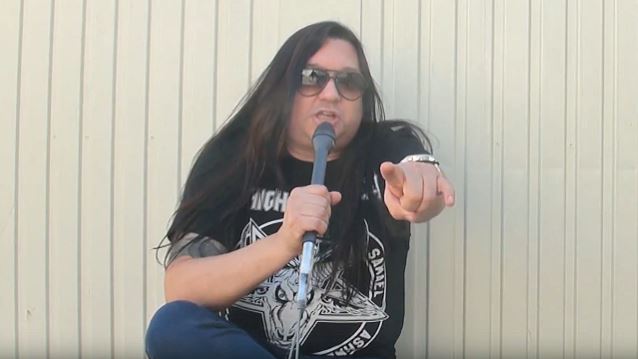 Kaaos TV conducted an interview with guitarist Eric Peterson of San Francisco Bay Area metallers TESTAMENT prior to the band's July 1 performance at the Tuska festival in Helsinki, Finland. You can now watch the chat below. A couple of excerpts follow (transcribed by BLABBERMOUTH.NET).

On the progress of the recording sessions for TESTAMENT's new album, "The Brotherhood Of The Snake", which will be released on October 28 via Nuclear Blast:

Eric: "It's done. It's 99.9 percent done. I still have two solos to do when I get home, which is gonna happen tomorrow. [Laughs] But it's being mixed right now. So, like I said, it's 99.9 [percent] done as far as recording. Right now we're in the stage of mixing it, so we're trying to find the right sound. We're working with [British producer] Andy Sneap again. Andy always gets a great sound right away. The only difference on this one is we're trying to be a little bit more organic, and getting away from Andy's perfection sound, and get more of a looser… you know, still keeping the slickness of it, but trying to get a little bit more raw. So it's kind of a hard way to describe it. But we don't want it too perfect. And I didn't record four guitars; I did two this time. So there's a lot more air going on with the rhythms and stuff like that."

On why TESTAMENT has chosen to approach the recording process slightly differently this time around:

"When you write a song, especially the way this one was written, you don't really know the songs. You make them up, you play them a couple of times. Vocally, Chuck [Billy] writes the lyrics, sings them maybe three or four times, and then that's it. And then the rest of our lives, when we play it, he sings it a hundred times, and it's gonna sound different. So that's the only challenge. And that's for any band, I think.

"I think for Chuck, vocally, he's finding the right spots where to put the 'death' growls and where to sing. And just the music in general, everything's kind of got a good place, I think."

On whether the musical direction of TESTAMENT's new material is a throwback to the band's early albums or if it's more similar to the recent TESTAMENT records:

Eric: "More like the modern [TESTAMENT sound], but, you know, like I was saying earlier, having that more raw feeling. Of course, our influences have changed a lot. For me, I always get accused of listening to older stuff [and I am told that] I need to listen to more new stuff. But I always like to go back and listen to records from the '70s and the '80s. And I won't name the bands I listen to, but I listen to a lot of different stuff that has nothing to do with metal, because I hear things differently. I don't hear it, like… You know, like if I listen to [American blues rock guitarist] Joe Bonamassa or something, I'm not, like, 'Wow, I wanna sound like that.' I just kind of get ideas of key changes and the way he hits certain notes or whatever and apply it to what we're doing. And that's the same thing with anything."

TESTAMENT will promote "The Brotherhood Of The Snake" by teaming up with AMON AMARTH for a European tour this fall.