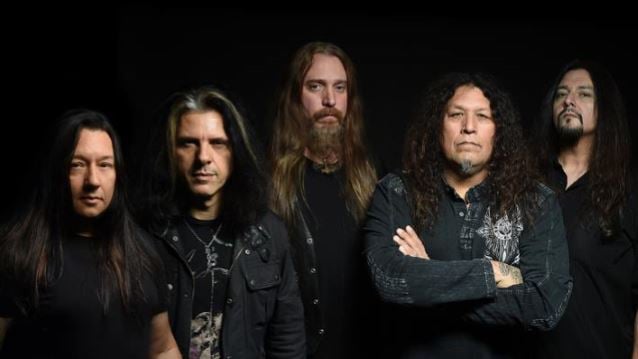 Veteran San Francisco Bay Area metallers TESTAMENT have set "The Brotherhood Of The Snake" as the tentative title of their eleventh studio album, due later in the year via Nuclear Blast. The music for the CD's projected title track has already been recorded, with the vocals set to be completed in the coming days. "I'll start tracking probably sometime this weekend and get it mixed hopefully next week," TESTAMENT singer Chuck Billy told Chris Annunziata of WMSC 90.3's "Metal Teddy Bear Experience" radio show (hear audio below). "And I think we'll probably put it out. I think it's probably gonna look like maybe a freebie, giveaway song that we'll just give people to check out."

TESTAMENT guitarist Eric Peterson recently told Metalholic.com that the song "The Brotherhood Of The Snake" will feature "the fastest blast" TESTAMENT drummer Gene Hoglan has ever played, a sentiment that is echoed by Billy. "It is definitely some fast blast beats going on in there," Chuck said. "That's definitely a standout [song], but a lot of this record, the new record, is definitely gonna be geared up to a little more faster than [2012's] 'Dark Roots Of Earth' record, definitely a little more aggressive musically, for sure, probably vocally as well. I think I'll probably attack with a little more heavier voice on this one. I'll kind of feel my way through the song, which voice to use. But there's definitely gonna be some 'Demonic' [-type] stuff, but again like 'The Gathering', 'cause I think I did a little bit of everything on that record, which that's what we'd like to accomplish."

Regarding the songwriting process for "The Brotherhood Of The Snake", Billy said: "We've been working on it quite some time. We don't write records that have extras off the last record. It takes some time, man. And it's not as easy as it used to be either, 'cause we all don't live near each other, so it's not like we just go down to the studio and just kick the songs around. It all starts on the Internet, just kind of going through riffs and stuff. So it's quite a process, but we're there now. We've got all the music done, and the vocals is the last thing left for us to kind of make sure it's all sorted out."

Speaking about the lyrical themes covered on the new TESTAMENT album, Billy said: "It's a little all over, but the main part of them in [the song] 'The Brotherhood Of The Snake' is, basically, early five thousand years ago, secret-society kind of stuff. And we're really fascinated with a lot of… I was born Catholic, and seeing all these shows on aliens and the connection between religion and aliens, and it just kind of makes you think about everything. So there's a fascination in with that. I'll probably connect with my native heritage again some songs. So just a little bit of everything that affects our life."

According to Chuck, he will attempt to complete the lyrics for "The Brotherhood Of The Snake" once TESTAMENT hits the road with SLAYER and CARCASS later this month. "On this tour, the music, like I said, will be done," he said. "The lyrics, it'll be easier, probably, to get lyrics done on tour. Writing the music, it's really tough, because, of course, there's nowhere to jam. But as far as the vocals, I'm bringing all my recording gear, so I'll be able to still do all the demos vocally out on the road."

Chuck was reluctant to offer up any other songtitles, explaining that "the lyrics are still being wrapped up. So those songs won't be actually titled until we're right down to… Even after the lyrics are done, we'll [go], 'Okay, this is what it is.' They all have working titles, but they don't make sense right now. They make sense to us, 'cause that's how we recognize them right now. We'll be working on the vibe of the song and then once the lyrics are done, then we'll kind of go, 'Okay, that's what that song is.' Once we know what topics we're hitting, then they'll be titled. So right now, I'm in a point where I'm just singing melodies and patterns and stuff for the songs with some lyrics here and there. And the once we sit down to write the lyrics, that's when it really takes shape and that's when we really feel the vibe of the song and where we're going with it."