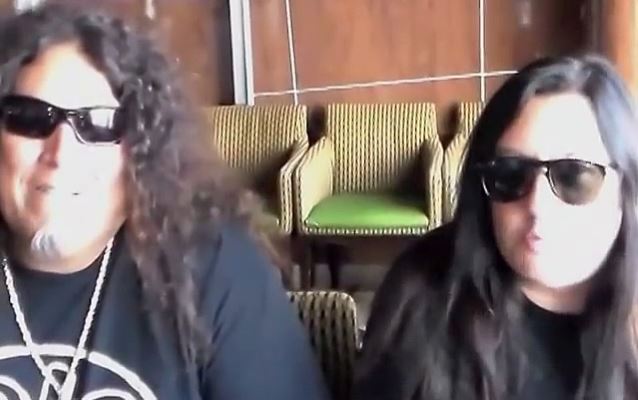 Asked to name his "favorite sappy balad," Peterson said: "I would say 'The Legacy' [from TESTAMENT's 1990 album 'Souls Of Black']. The last time we played that song was in Mexico City. Some kid came to us and had a picture of a girl that just died. And he was, like, 'He wanted to come to the show so bad.' And it was an unfortunate death. She was obviously young. I think she was 18. I forgot her name. But [the song] wasn't even in our set, and he asked us, can we play the song for her? And I remember when we played it, the lighters came up, and we had her picture on the drum riser, and it was pretty sappy. I started crying. I was just, like… Chuck was singing killer. It was great. That was the last sappy ballad I could think of."

TESTAMENT is writing material for the follow-up to 2012's "Dark Roots Of Earth" album for a tentative early 2015 release. Billy said in a recent interview that would like the new CD to sound along the lines of 1999's "The Gathering", "because 'The Gathering', for me, was such a turnaround record for the band. I think we really found our style and place, and the songs on that, to me, are probably gonna be some songs that stand the test of time, for sure. I think, 'cause we started experimenting with blast beats and a different style of guitar rhythms and picking on the guitars, it was different for us, and I really like where that went. So we hope that's where it all kind of ends up, and that's what we're shooting for."

TESTAMENT in January announced the departure of bassist Greg Christian and return of Steve DiGiorgio.