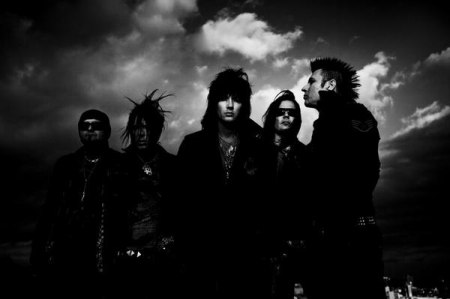 Rock Rebel Magazine conducted an interview with singer Jyrki 69 of Finnish goth metallers THE 69 EYES when the band played at Live Club, Trezzo sull'Adda, Italy on April 10, 2011 during the Dark Decadence Tour 2011 with CRASHDÏET and HARDCORE SUPERSTAR. You can now watch the chat below.

THE 69 EYES's latest album, "Back In Blood", was issued in Europe (excluding Finland) on August 28, 2009 via Nuclear Blast Records (September 15, 2009 in the U.S. through The End Records). It was tracked with the Grammy-winning producer Matt Hyde (SLAYER, MONSTER MAGNET, FU MANCHU) and features a guest appearance by MONSTER MAGNET's Ed Mundell. The recording process took place both in Helsinki and Los Angeles.

The first single from the album, "Dead Girls Are Easy", was described in a press release as "a nasty power anthem for sleazy pin-ups complete with a sing-a-long chorus aimed at those online chicks with the looks that kill!" The video for the song was directed by Margera and the artwork was designed by Estevan Oriol, whose work has graced countless covers from such artists as CYPRESS HILL, THE TRANSPLANTS and SNOOP DOGG.