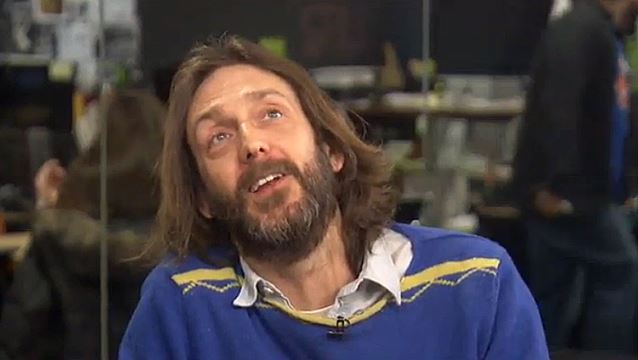 THE BLACK CROWES' CHRIS ROBINSON On His Brother RICH: 'We Never Really Had Much Of A Relationship'

THE BLACK CROWES frontman Chris Robinson spoke to Huff Post Live about the end of the band following his brother Rich Robinson's announcement that he's left the group. In January, Rich Robinson released a statement which said in part: "I love my brother and respect his talent but his present demand that I must give up my equal share of the band and that our drummer for 28 years and original partner, Steve Gorman, relinquish 100 percent of his share, reducing him to a salaried employee, is not something I could agree to."

Chris Robinson explained that despite the fact that he was in THE BLACK CROWES with his brother for more than 20 years, the two have never been close. "We never really had much of a relationship," he said. "I mean, that's the thing… You write some songs and that record sells six million copies and then you're supposed to keep going. And then there's family and there's responsibility and stuff."

Chris added that he had no regrets about his time in the band. "I'm proud of the work," he said. "THE BLACK CROWES gave me everything… the sheer, humble gift that that weird kid in Atlanta in the '80s could find his way through the world as an artist. I was in THE BLACK CROWES for 20-something years. That was fantastic. What a rare, unique opportunity. It was great. It was cool. All the bad stuff, all the good stuff. It is what it is."

Chris Robinson recently said that he was upset about THE BLACK CROWES split, but content to keep it a private matter for now. " THE BLACK CROWES is so much time and it's so complicated and then you mix family and whatever that is into it," he said. "And, y'know, I mean, to me, it's just sad and it's disappointing, really. It's unfortunate that on the 25th anniversary — whether the band was working or not — that it really isn't just about the songs and the good times these people had at these concerts and I'm gonna keep my personal, private family business personal and private."

THE BLACK CROWES went on hiatus in 2001, and in 2004, Rich began his solo journey with the release of his first album, "Paper". It would be seven years before his second solo album, "Through A Crooked Sun", and an accompanying EP, "Llama Blues", were released, as the CROWES reunited in 2005 and were actively recording and touring until their second hiatus in 2010.