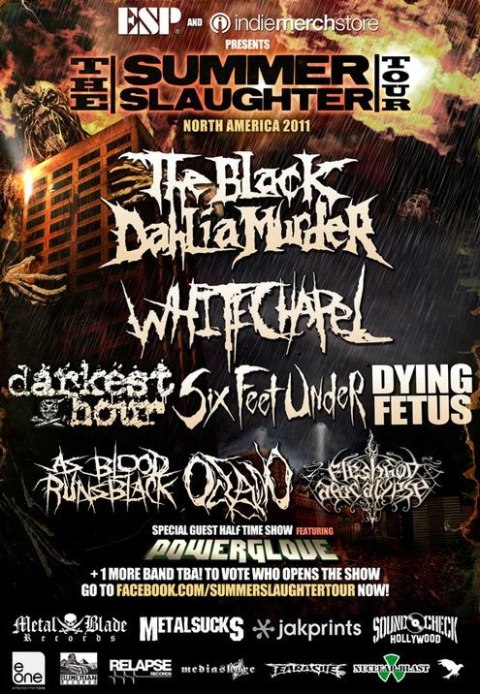 THE BLACK DAHLIA MURDER and WHITECHAPEL will headline this year's installment of the "Summer Slaughter Tour", which will run from July 21 through August 21. The fifth annual travelling festival will feature additional performances by such heavyweights as DARKEST HOUR, SIX FEET UNDER, DYING FETUS, AS BLOOD RUNS BLACK, OCEANO, FLESHGOD APOCALYPSE, as well as a special halftime appearance by POWERGLOVE. However, the madness doesn't stop there as for the first time in Summer Slaughter history the fans will vote on the band that will open the tour

Ash Avildsen, Summer Slaughter founder, said in a statement: "We had a lot of great ideas for bands for the middle of the bill like OBSCURA, SPAWN OF POSSESSION, 1349 and more. Unfortunately, none of them were available for the tour. So to keep it real for the fans, who without this tour doesn't exist, we decided to bump everyone up a slot and allow you guys to choose who opens the tour! Not only do you now get to play a part in determining the lineup, but you'll have more time to get inside the venues and not miss the almighty FLESHGOD APOCALYPSE from Italy!"

Added Shawn Keith, Summer Slaughter co-producer: "We chose 10 of our favorite metal labels to each have one band in the contest who were already getting a lot of buzz on the Summer Slaughter Facebook page. Please participate and vote now for your top three picks from the list!"

Head over to www.facebook.com/summerslaughter now to check out the list of artists to choose from and to cast your vote (deadline is April 11). This tour is for the fans, so let your voice be heard.

The billing for the travelling festival is shaping up as follows:

Exact cities, venues and dates for the tour will be announced on April 20.