Sioux Falls, South Dakota/Lawrence, Kansas-based hardcore/metal band THE BLINDING LIGHT has completed work on its new album entitled "June Bug". The exact release date and label details have not yet been confirmed.

With two solid releases through Deathwish Inc., THE BLINDING LIGHT's new CD "is sure to help plow a new path way for the future of extreme music," according to a press release. "From the music to the visual concept and artwork by the infamous Aaron Horkey, this much-anticipated, long-overdue album is bound to make heads spin and become a favorite for all extreme music fans."

Check out a few tracks from the completed recordings:

THE BLINDING LIGHT is a uniquely creative tech/metal/hardcore/doom hybrid fronted by Brian Lovro (ex-THREADBARE). The band began when Lovro moved back to the wastelands of South Dakota sometime after the demise of THREADBARE. Uninspired by most aggressive music of the day, he chose to lay dormant from music. After a short creative slumber, he was approached by members of the area metal outfit CALIGARI to contribute his talents to a new project. After a few rehearsals, the direction of this monster took shape, and THE BLINDING LIGHT was born.

THE BLINDING LIGHT is: 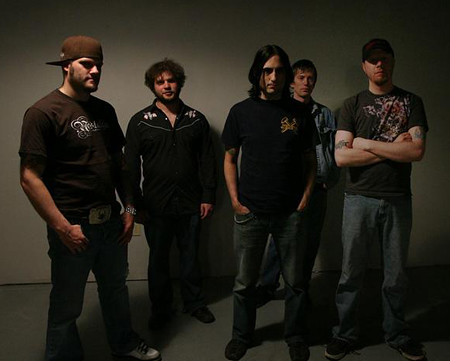