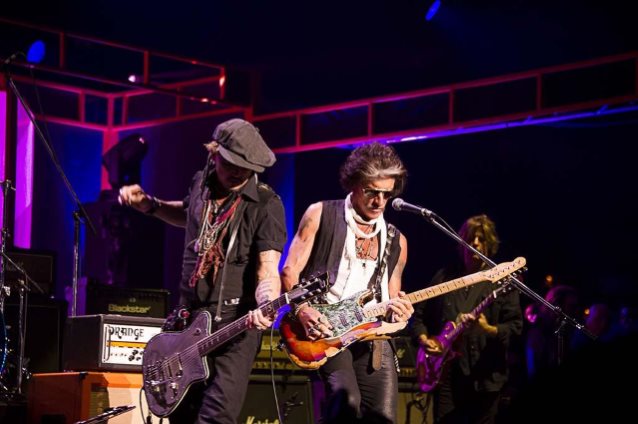 Icons of rock and metal take over Tokyo in the star-studded hour premiere of "The Classic Rock Awards 2016", coming to AXS TV on Sunday, February 19, at 8 p.m ET / 5:00 p.m. PT. This is the second time that the network will air "the biggest rock party of the year," after broadcasting the event in 2014.

Filmed live on November 11, 2016 at the world-famous Ryogoku Stadium in Tokyo, Japan, "The Classic Rock Awards 2016" is the ultimate celebration of all things rock and metal — honoring up-and-coming acts and established legends, alike, for their contributions throughout the year. The epic evening was hosted by MEGADETH frontman Dave Mustaine, and featured such unforgettable moments as Jeff Beck presented with the Icon award by LED ZEPPELIN guitar god Jimmy Page; SCORPIONS axeman Rudolf Schenker presenting Richie Sambora with the Classic Songwriter award; DEF LEPPARD winning Album Of The Year; and appearances and performances by Johnny Depp, Joe Perry, CHEAP TRICK, and Orianthi, among others.

The night's winners were selected by Classic Rock magazine, as well as by listeners of U.S. classic rock radio stations, including the entire iHeartmedia platform. 2016 marked the first time ever that the special event had been held in Japan, after previous stints in London and Los Angeles.