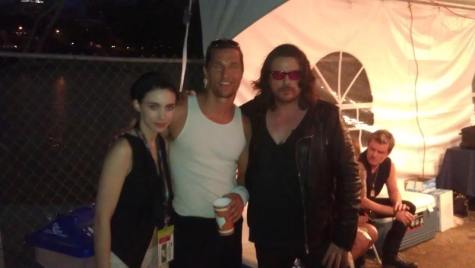 Concert and backstage footage was shot last week at THE CULT's 25,000-capacity SXSW (South By Southwest) concert at Auditorium Shores in Austin, Texas for Terrence Malick's upcoming feature. Rooney Mara, one of the stars of the film, was at the Auditorium Shores show and shot onstage footage as well as improvised scenes backstage with members of THE CULT.

Left to right in photo below: Rooney Mara, Matthew McConaughy (who played congas on two of THE CULT's songs),THE CULT's Ian Astbury

THE CULT will release its first studio album in five years, "Choice Of Weapon", on May 22 via the band's new label Cooking Vinyl.

"Choice Of Weapon" is the follow-up to the critically acclaimed 2007 release "Born Into This" that the U.K.'s Mojo magazine called "a wholehearted, utopian and irrefutably exciting record." Longtime THE CULT collaborator and producer Bob Rock (METALLICA, BUSH),who produced one of THE CULT's most successful albums, the platinum-certified "Sonic Temple", put the finishing touches on the foundations that were laid by co-producer Chris Goss (QUEENS OF THE STONE AGE, U.N.K.L.E., MASTERS OF REALITY).