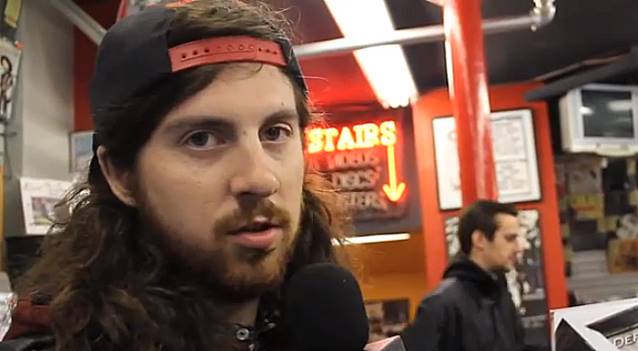 On October 5, host Jon Wisbey of the BCFM "Sunday Rockshow", which airs in Bristol, England, conducted an interview with THE DEVIL WEARS PRADA guitarist Jeremy DePoyster. They talk about the band's history; their faith; the joys of touring with SLIPKNOT and SLAYER; and life on the road. You can now listen to the chat in the YouTube clip below.

"First Sight" is taken from THE DEVIL WEARS PRADA's fifth studio album, "8:18", which sold around 16,000 copies in the United States in its first week of release to debut at position No. 20 on The Billboard 200 chart. The CD arrived in stores on September 17 via Roadrunner.

Long acclaimed as among one of the most potent and provocative bands in modern American metal, THE DEVIL WEARS PRADA made a massive leap forward with the stunning "8:18". The album — executive-produced by KILLSWITCH ENGAGE's Adam Dutkiewicz and produced by the band along with producer/engineer Matt Goldman (UNDEROATH, THE CHARIOT) — sees the group driving its relentless sonic approach with more might than ever before, giving extreme power to Hranica's grim, emotional lyricism.

THE DEVIL WEARS PRADA's North American headline tour, dubbed "The 8:18 Tour", got underway November 2 in Detroit at the Royal Oak Music Theatre and continues through December 20, wrapping in Toronto, Ontario, Canada. Support on the trek is coming from THE GHOST INSIDE, VOLUMES and TEXAS IN JULY.