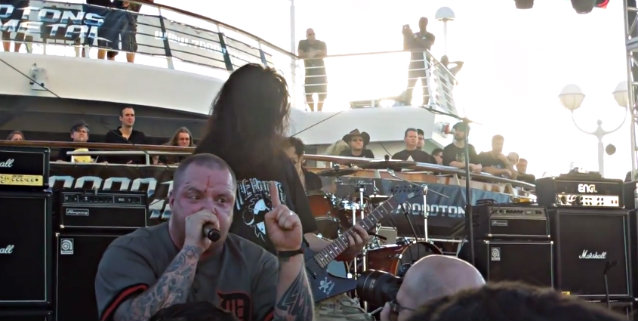 The new lineup of Swedish metallers THE HAUNTED made its live debut during the 2014 edition of "The World's Biggest Heavy Metal Cruise" — 70000 Tons Of Metal — which sailed January 27 to January 31 from Miami, Florida to Costa Maya, Mexico and back.

Fan-filmed video footage of THE HAUNTED's performances aboard the cruise can be seen below.

"Eye Of The Storm" track listing:

Commented THE HAUNTED's founding member and guitarist Patrik Jensen: "There aren't superlatives enough to describe how much the band has longed for these three songs to be released.

"We are sure fans have been anxious to know what the band sounds like today after all the turmoil and old members leaving and new members joining.

"We feel that these three songs represent the band perfectly.

"We are currently working on the new album, an album that will be filled to the brim with what we know to be THE HAUNTED.

"We'll start doing gigs this spring and we'll do festivals all over the place this summer.

"Get in touch with the festivals you visit (and behave like an animal at) and tell them to get us on the bill!

"THE HAUNTED is back.

THE HAUNTED's founding member and guitarist Patrik Jensen stated about the band's new lineup: "THE HAUNTED went through some difficult times last year. Losing three band members is a pretty huge blow to any band. Jonas and I agreed immediately that we wanted to continue with the band, but we wanted to take our time and not rush into anything.

"Some of you might recognize a few faces, some of you might not. Adrian Erlandsson is back on drums and Marco Aro is back on vocals. Adrian you might know from playing on our first album and Marco sang on 'The Haunted Made Me Do It', 'Live Rounds In Tokyo' and 'One Kill Wonder'. On guitar we also have Ola Englund bringing some pretty heavy chops to the band.

"We're all VERY excited about having THE HAUNTED back in working shape again and we can't wait to get back out on the road to play for our very patient and faithful fans again. A new album is also already in the works and if you are familiar with the individual band members of this new lineup, you can be assured that the new material will grab you by the throat from the get-go!"

Vocalist Marco Aro (ex-FACE DOWN, also in THE RESISTANCE) was previously involved with THE HAUNTED for three acclaimed releases between 1999 and 2003 as well as for several worldwide touring campaigns. Drummer Adrian Erlandsson (also in AT THE GATES and PARADISE LOST) belonged to the original lineup of THE HAUNTED together the Björler twins after the demise of their previous legendary group, AT THE GATES. Together with Jensen, they launched THE HAUNTED's self-titled debut in 1998, an album which has been widely considered as the kick-start for a new era in the thrash metal movement and which, despite its initial underground status, climbed to be a massively inspirational record for a whole new generation of musicians and bands in the following decade. Guitarist Ola Englund is a highly talented young player from Sweden, who has recently been active as touring and recording member of U.S. death metal institution SIX FEET UNDER.