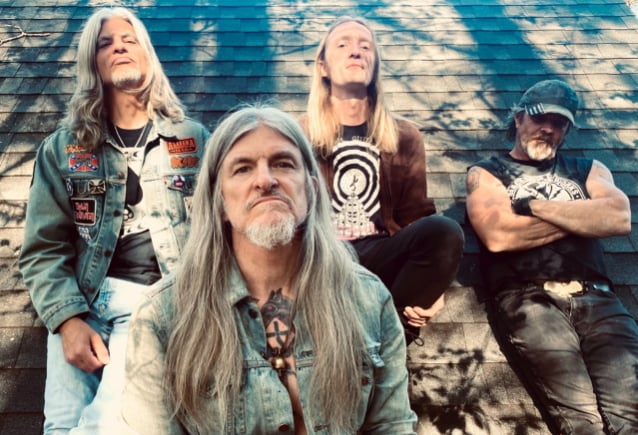 Earlier today (Wednesday, September 14),the band released the following statement via social media: "It is with regret that THE OBSESSED will not be playing the September 20th show in San Francisco at The Knockout. We cannot agree with or condone any type of discrimination for entry. Thanks for your understanding."

When one person asked THE OBSESSED frontman Scott "Wino" Weinrich on his Instagram if the show was called off because attendees "gotta be vaxed", Scott responded: "Yup".

Back in August 2021, Wino took to his social media to fuel the conspiracy theory that coronavirus is a genetically engineered bioweapon that U.S. researchers helped create, and that thousands of doctors, scientists and elected leaders are apparently conspiring to hide the truth. Wino went on to claim that he had done extensive research through YouTube, scientific publications, journals and lectures, and insisted that the evidence points to the the virus existing and being weaponized.

Weinrich discussed his controversial COVID-19 views in a January 2022 interview with Shawn Ratches of Laughingmonkeymusic. He said: "I had COVID. So it totally exists; I'm not denying that it exists. And I'm not anti-vaxx either. But we know for a fact… You can go right on the Moderna web site," he continued, referencing the biotech company behind one of the three federally cleared COVID-19 vaccines. "It's not a vaccination. It's not a vaccination by any standards. It is a platform. That's what they say on their web site. So anybody can take it from there.

"When the government comes out and says there's no federal response to COVID, what the fuck does that mean? What that means is that CDC protocol prohibits the use of anything that will cure you.

"No matter what anybody says, I know what I know, and it all points to a sinister depopulation agenda. And I don't give a fuck what anybody thinks. That's what I believe."

Wino went on to imply that he has no plans to get the COVID-19 vaccine anytime soon. "If I'm gonna stick an injection in my body, I wanna get high," he laughed.

Like other COVID-19 vaccine-hesitant individuals, Wino said that he considers himself a critical thinker who puts a high premium on having done his own research and distrusts authorities or mainstream experts.

"I often wonder what is it about me or about other people that just makes me have this intense curiosity where it makes me wanna dig deep," he said. "I don't really understand what that is. I think maybe it has something to do with genetic imprint — possibly. I don't know."

When Weinrich canceled his appearance at the Psycho Las Vegas festival in August 2021, the doom metal godfather and THE OBSESSED founder, who was scheduled to play an acoustic set at the event, said that "we are under the authoritarian cloak of a small cadre of unelected so called 'elite' who are beyond rich and consequently consider themselves above the common man. This virus I believe was created as a depopulation tool, and the fear associated with it as a means to subjugate and enslave you and I, the common people."

Wino and the rest of THE OBSESSED originally hit the road with THE SKULL in July 2021 but THE SKULL was forced to drop off the tour the following month after that band's lead singer, fellow doom metal legend Eric Wagner (formerly of TROUBLE),was hospitalized for COVID pneumonia. Wagner, who was reportedly not vaccinated against COVID-19, died days later at the age of 62.

Wino has dealt with drug abuse throughout the years and famously got busted with meth in Norway in 2014 while touring with SAINT VITUS.

It is with regret that The Obsessed will not be playing the September 20th show in San Francisco at The Knockout. We...

Posted by The Obsessed on Wednesday, September 14, 2022 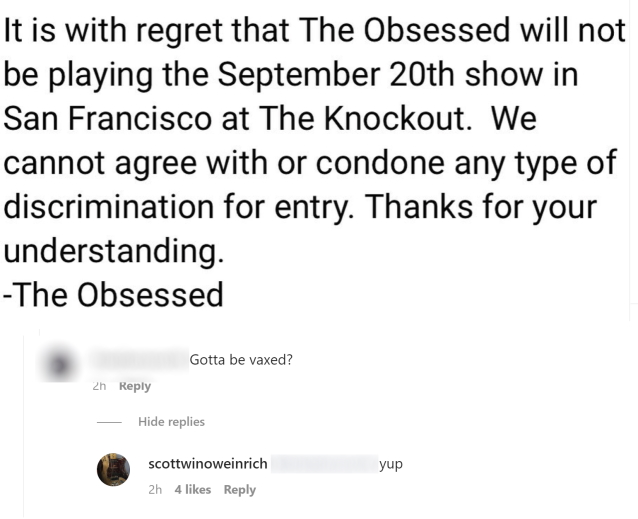 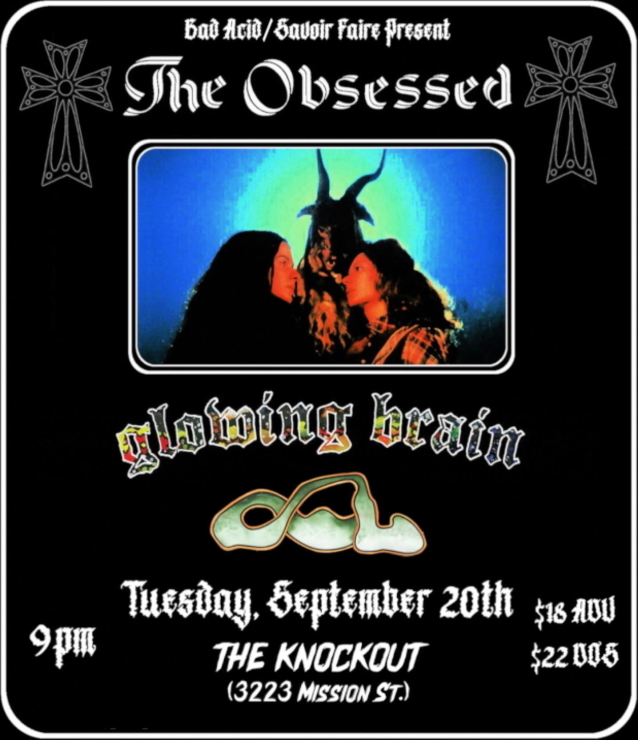