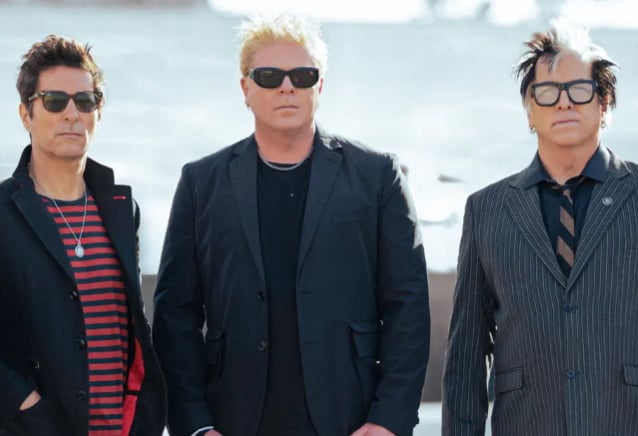 THE OFFSPRING singer Bryan "Dexter" Holland has confirmed to Times Colonist that he and his bandmates are planning to enter the studio in January with longtime producer Bob Rock to begin recording a new album, due next year. It will be the follow-up to 2021's "Let The Bad Times Roll", which has been a huge global success, hitting career-high chart debuts with seven top 5 and ten top 10 international debuts and nine top ten debuts in the U.S. The album peaked at No. 3 on the U.K. chart and hit No. 1 on the Alternative Albums chart in the U.S.

"In a funny way, I think the [pandemic] break really energized us," Holland told Times Colonist. "It gave us time to let us finish the last record, and we got the band real tight. We've decided to keep on going, so when we're in-between tours, we're working on new material."

Holland went on to say that he and his bandmates plan to ride the rollercoaster for as long as they can. "The nature of the music business is that you never know when your time is up," he explained. "We're very fortunate to still be here. But as Jim Morrison once said, 'The future is uncertain and the end is always near.' It always seems like we can do this for a few more years — people are still coming to the shows, and we're still getting played on the radio — so for the time being it seems okay. But beyond that, who knows?"

In a previous interview with the Dallas Observer, Dexter stated about the decision to release an album during the coronavirus pandemic: "It seems like a strange thing to release a record right in the middle of a pandemic when you can't tour. It had been so long since we had done a record, and we didn't want to wait anymore. We thought, 'This is what we do as a band, so let's go ahead and put it out anyway.' It wasn't supposed to be that long. You just get busy with touring and what else goes on and writing songs. We go into the studio when we can; we don't really block off, like, 'Okay, in six months we're going to write a record.' The songs have to come when they come, so it took a little longer. I went back to school for a while, there were a bunch of things, so we did not intend for it to take that long, but it just did. That was the time when the record was finished and we thought, 'Well, what the hell. Let's get it out.'"

Throughout THE OFFSPRING's career, they've sold over a staggering 40 million albums, and toured arenas, and built a global fan base. "Let The Bad Times Roll" marked the band's tenth studio album and third album produced by the legendary Rock. True to the irreverence at the core of their rock music, the band and Holland took a view to today's cultural moments and didn't shy away from creating topical material in this album.

"This album is probably the most cathartic thing we've done," Holland previously said. "The messages might be dark, but at the end, what's left is that communication is important, working through feelings is important and most of all, hope is important."