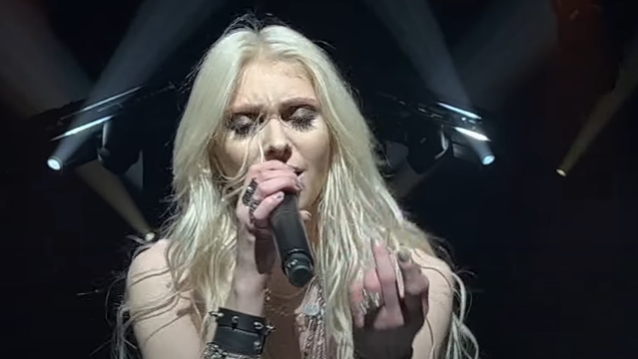 THE PRETTY RECKLESS has canceled three shows this weekend after singer Taylor Momsen tested positive for COVID-19. The announcement came just one day before the band was set to kick off its co-headlining tour with HALESTORM.

On Thursday (July 7),the band released the following statement via social media: "Despite our best efforts, COVID finally bit. We could not wait to get back on the road with our friends in HALESTORM, but wait we will have to.

"We hope to feel better soon and will make it out to the very first venue we can, so stay tuned for real time updates here."

Momsen also shared a photo of her positive test on Instagram and captioned the image: "Yup…FML".

In July 2020, in the early months of the coronavirus pandemic, Momsen told the 95.5 KLOS radio station that she was "nervous" about the prospect of playing live shows in states where concerts were allowed. "I'm a hypochondriac and a freak about this stuff anyway. I wear masks on airplanes regardless. I think it stems from being a singer and touring and just desperately trying to not get sick on tour. When you're sick on tour, it's awful. There's no time to recover, and you kind of never get better; you just kind of suffer through the rest of that leg. You're never 100 percent again until the tour is over. So my paranoia of the Purell [hand sanitizer] and the masks and everything, it's not too different now that I don't leave the house."