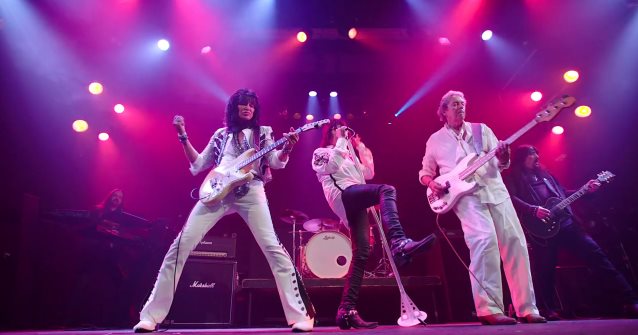 A video for "Lost And Lonely" was filmed at The Chance theater in Poughkeepsie, New York. The clip, which can be seen below, marks the first time since 1980 that three members of ANGEL appear together in a music video.

The video was shot by Jeffery Moore, who co-directed with Danny Farrow.

"Man, we had such a great time shooting our latest video with Frank, Felix and the guys," says Punky.

"Danny and I talked about doing this video for a while. We thought it would be something special for not only the fans of my band, but for the many ANGEL fans as well. Frank really delivered on this track, and the whole band kicked ass!!!"

An autographed limited special edition of Meadows's "Fallen Angel" full CD with the Frank DiMino version of "Lost And Lonely" can be ordered at www.mainmanrecords.com.

In other news, Punky and his band just signed with The Artery Foundation artist management, and will be working on many new exciting things together, including a slew of shows for 2018.

Punky and his band will be playing a special show November 10 at the Debonair Music Hall (Mexicali Live) in Teaneck, New Jersey.

Former members of ANGEL appeared at the Vegas Rocks! Hair Metal Awards in May 2016 at the at the Eastside Cannery Hotel & Casino in Las Vegas. The group received the "Glam Rock Legends" award in honor of their contributions and influence in music. Accepting the award were Meadows, DiMino, Gregg Giuffria, Barry Brandt, and Robinson. This marked the first time all surviving ANGEL bandmembers — bassist Mickie Jones passed away from cancer in 2009 — had been on stage together since 1980.

Formed in 1975 by Meadows and Jones in Washington D.C., ANGEL straddled the fence between the prog-rock pomp of YES and ELP, the orchestral hard pop of QUEEN, BOSTON and ELO, and the riff-heavy raunch-rock of KISS and AEROSMITH. They were discovered by KISS bassist/vocalist Gene Simmons while performing at a nightclub and were eventually signed to the same label as KISS, Casablanca.

Released in the fall of 1975, the band's self-titled debut was promoted with a number of live appearances on the great American arena circuit with the likes of AEROSMITH, BLUE ÖYSTER CULT, JOURNEY and RUSH. The group's gimmick — the members were all dressed in white — got them labeled the "anti-KISS" by rock critics, and their spectacular stage show was so over the top that even Simmons & Co. were said to have been inspired by it.