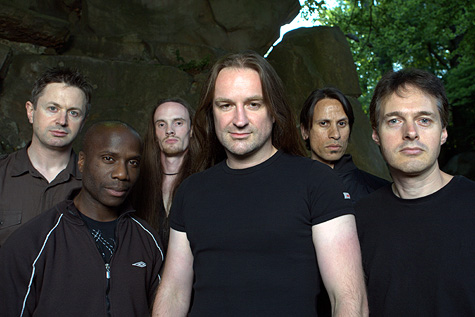 British progressive metallers THRESHOLD have set "March Of Progress" as the title of their new album, due early next year via Nuclear Blast Records. The CD will mark marks the return of the band's original vocalist Damian Wilson (HEADSPACE, STAR ONE) who rejoined the group in 2007 following the departure of Andrew "Mac" McDermott, who sadly passed away in August.

"March Of Progress" is being produced at Thin Ice Studios and Eightspace Studio in the U.K. by Karl Groom and Richard West.
Provisional songtitles set to appear on the CD include:

THRESHOLD will perform a handful of pre-release shows in April 2012 to promote the album.

THRESHOLD's last studio CD, "Dead Reckoning", was released in 2007 and featured guest vocals by Dan Swanö (NIGHTINGALE, BLOODBATH). The CD entered the charts at position 64 in Germany, 95 in The Netherlands and 37 in the U.K. (rock chart).