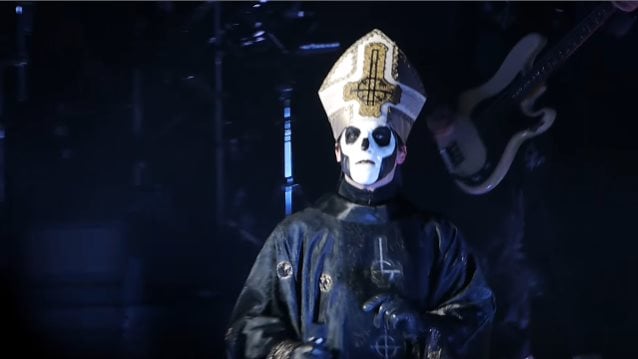 TOBIAS FORGE On GHOST: Call It A Solo Project, If You Want To

GHOST singer and chief songwriter Tobias Forge, who performs as Papa Emeritus, has once again defended the group's lineup changes, explaining that all the other musicians in GHOST are replaceable.

The Swedish-based act underwent a complete overhaul at the end of 2016, when Forge fired the entire lineup and recruited new players for this year.

Forge — who does all the band's interviews as a Nameless Ghoul — recently said that GHOST has always been essentially a one-man project, with many session musicians coming and going over its seven-year existence.

Speaking to CBS Philadelphia, Forge said about GHOST's personnel shuffles (hear audio below): "I have been in the band since I started the band. I started writing songs for it in 2006.

"Nowadays there's a handful of very new members, yeah. But there has been about ten to fifteen people now going in and out of the band, so there's been a lot of rotation."

Admitting that "it's always an inconvenience when you're changing people in a band," Forge said that hiring new musicians means that "you have to get someone else in there and you have to teach that person from scratch everything. We're not doing twelve-bar blues here, so it's not something that you can just pick up on. And luckily for me, since I've written most of everything, of the patterns, I can teach anyone coming in, 'This is how the bass line goes, and this is how the guitar riff goes, and this is how the keyboard goes and this is how the drums go.' So it's not very hard for me to make my stamp rub off on anyone coming in and playing that instrument. But that also adds to the friction over the years. Because it's never really been a band in the classic sense that you have someone who plays his or her instrument and that she or he is the only person in the world that can make it sound like that. People have a tendency to want to feel that they're very important for something, and if it's not crucial that they're there, there will also be a little bit of a friction there."

Asked if he personally views GHOST as a solo project with different people coming in, or if he sees GHOST as a band, Forge said: "I actually refer to it as the earlier of the two options. Even though I've never wanted it that way, but at the end of the day, that is what it is. So I think it speaks clear for itself. I mean, I started it in 2006, and no one that was ever in the band in 2016 was even on the first record. Call it solo, if you want to, but I call it a project."

Forge also confirmed that GHOST will enter the studio at the end of the summer to begin recording its fourth full-length disc for an early 2018 release.

"I've been writing the album for years," he said. "As with the earlier album as well, I tend to write all the time and then, two years in advance, I start mapping out what this record is gonna be, and as much as I know what the next album after that is gonna be about, sort of, even though it's a little bit more misty right now. I know very clearly what the new record will be about. And that record, the new record that we're gonna start recording now in August, is something that I've been working on for three, four years."

As previously reported, GHOST is rumored to have a new drummer for its current U.S. tour as the opening act for IRON MAIDEN. The trek kicked off on Saturday (June 3) in Bristow, Virginia and diehard fans who watched video footage of GHOST's set noted a "slight difference in drum set, different style of playing and slightly larger build" of the person behind the kit. Like the other instrumental members of the band, the drummer is masked and known only as a Nameless Ghoul.

This means the current GHOST drummer is apparently not the same one that toured Europe with the band in March and April.

Forge was sued two months ago by four ex-members of the band, who accused the vocalist of cheating them out of their rightful share of the profits from the band's album releases and world tours.

GHOST has a night off from the IRON MAIDEN tour on Tuesday night (June 6) and will play a headlining show in Albany, New York.