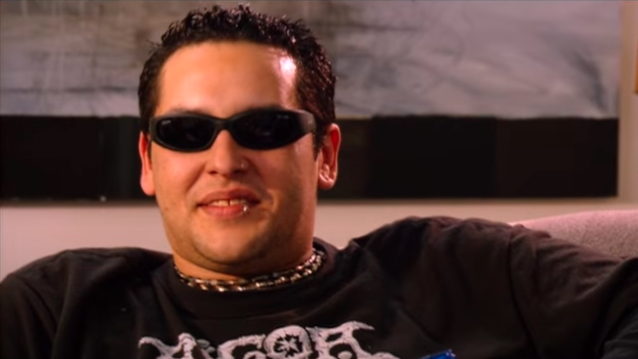 Gray passed away on May 24, 2010 from an accidental overdose of drugs, leaving behind his wife Brenna and daughter October, who was born the following August.

Paul was just 38 years old at the time of his passing.

Five years ago, SLIPKNOT singer Corey Taylor penned a lengthy tribute to his fallen brother — including reflections about Gray's life, music and legacy — in an issue of U.K.'s Kerrang! magazine.

He continued: "I think that's the overall memory I cherish the most about him: his energy and his excitement. Even if you weren't 'feeling' something musically or anything else to do with the band, he was the world's best cheerleader. After one conversation with him, you'd be so ready to play or tour or record or whatever that you'd be jumping out of your skin. Whenever I'm feeling jaded, I remember that. I remember this gift that he and I and the rest of SLIPKNOT were able to buld together."

Gray was found dead after overdosing on drugs in a hotel room in a suburb of Des Moines, Iowa, where he and SLIPKNOT were based. His family blamed the death on a Des Moines pain doctor, Daniel Baldi, who had treated Gray for years, and sued the doctor and his former employers. The lawsuit was eventually settled.

Baldi was accused of causing the deaths of Gray and eight others with his careless prescription habits.

The doctor was acquitted in May 2014 of seven criminal counts of involuntary manslaughter.

Paul's wife, Brenna Gray, testified during Baldi's trial that Paul's final weeks were a "blur of extreme drug abuse," which neither his doctor nor his bandmates would help his wife confront. She said that Baldi continued to prescribe Xanax for Paul despite knowing that the musician was a drug addict, saying, "I just wasn't really sure why he was on it, why he needed it along with the medication he was taking for addiction."

Brenna also testified that she tried reaching out to some of Paul's bandmates in SLIPKNOT just days prior to the bassist's death but that none of them wanted to get involved. She revealed: "One was playing golf two minutes away from our house but couldn't come. Nobody else cared, nobody was involved. They told me it was my problem."

After a lengthy hiatus, SLIPKNOT resumed touring in 2011, with Donnie Steele playing bass live. The band in 2014 secured the services of British musician Alessandro "Vman" Venturella to play bass on tour and in the studio.