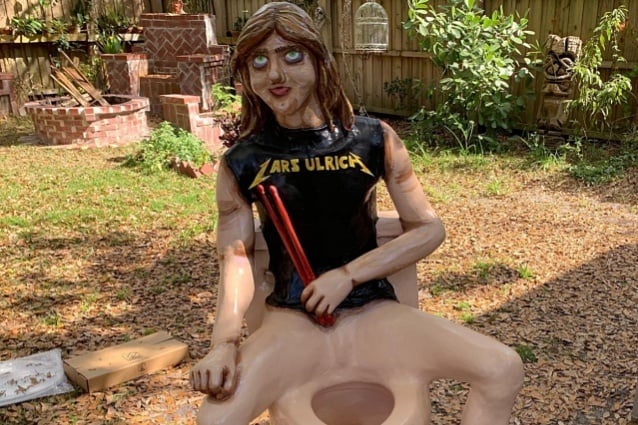 According to the Tampa Bay Times, Ripley's Believe It Or Not! museum in Denmark has acquired the toilet a heavy metal musician and visual artist from Tampa, Florida sculpted to look like METALLICA drummer Lars Ulrich.

The artist known as Prince Midnight donated the toilet to Ripley Entertainment, which will soon be shipped to the Ripley's "odditorium" in Copenhagen, where it will go on permanent display.

Although some people have interpreted the Ulrich toilet as an insult, Prince Midnight insists that is "absolutely not the case."

"This toilet was built by a METALLICA super fan," he told the Tampa Bay Times. "They wrote the first songs that meant something to me."

Prince Midnight said he chose to depict Ulrich in toilet form because Lars "as the drummer, is usually depicted sitting.

"I could have done a urinal with [frontman] James [Hetfield]," he added, "but that's not where the creative spirit was leading me."

In a separate interview with Creative Loafing, Prince Midnight said that the toilet was his way to honor not just Ulrich but others who have inspired him, like painter Marcel Duchamp, sculptor Claes Oldenburg and performance artist Terence Koh.

"I could have painted a picture or made a traditional sculpture, but no one would have even noticed, and really, that's not the kind of art and performance I do," he said. "The first band I ever loved was METALLICA. I even went to see them a couple years ago with LAMB OF GOD, so the passion hasn't waned."

METALLICA bassist Robert Trujillo has apparently approved of the toilet, saying in an interview after he was surprised with a picture of Prince Midnight's creation: "Oh my god! You're kidding. This is incredible, how come I didn't see this? This is a work of art. I want one. Where can I buy em?... I'm sure [Lars will] hear about this when I see him."

Born in Gentofte, Denmark, on December 26, 1963, Lars is the son of the Danish musician, filmmaker and former tennis pro Torben Ulrich, who turned 93 in October.