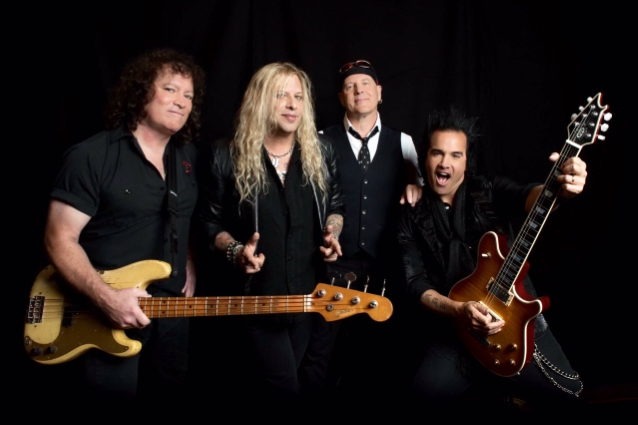 Brown says: "Rejoice FISTonians worldwide! My lions of the melodic rock world, TOKYO MOTOR FIST, have re-signed with the legendary Frontiers and are about to begin recording our second album! After the overwhelming success of our debut, Ted, Chuck, Greg, and I are more than ready and roaring to unleash a new TOKYO MOTOR FIST album."

Poley adds: "I am so excited to start production on the second TOKYO MOTOR FIST album! I was super happy with the success of the first album and I can't wait to start recording the follow-up! Time to show the world that TOKYO MOTOR FIST is a real band, not just a 'one-off' project! See us LIVE on the road in 2020."

Says Burgi: "Since hearing the news just a few days ago that TOKYO MOTOR FIST will be doing a second album for our friends at Frontier Records, I have been pumped beyond words! Well...one word does come to mind...JOY!!!! TOKYO MOTOR FIST is one of the coolest bands and most fun projects I've ever been involved with. Since it's inception, TOKYO MOTOR FIST has fulfilled a lifetime goal of mine which was to be in a great band playing great music where everyone not only gets along, but truly respects and cares for each other, a-a-a-and is awesome at their craft! For me the sky is the limit with what TOKYO MOTOR FIST will achieve in the future. With the vision and multi-talents of Steve Brown again at the helm, the powerhouse vocals of Ted Poley, the thunderous bass of Greg Smith caressing my drumming and the support of Frontiers, we are poised to rock the world with the follow-up to our debut album. It's gonna be wicked good!!"

Smith adds: "Words can't express how excited I am to do another album with my brothers in TOKYO MOTOR FIST! As much fun as it was doing the debut album, the fact that we actually got to play these songs in front of audiences proved to me what I knew in my heart: this was not just a one-off deal and the material would resonate with audiences at our live performances. I'm very much looking forward to the recording process and even more excited to play the new tunes in front of fans after it is released! Feel The Fist!"

You don't need to be a die-hard '80s metal fan to know that the fruits of an artistic alliance between Poley and Brown is going to make melodic rock fans rejoice. Indeed, TOKYO MOTOR FIST is exactly what you would expect: catchy and uplifting hard rock, the way it should be.