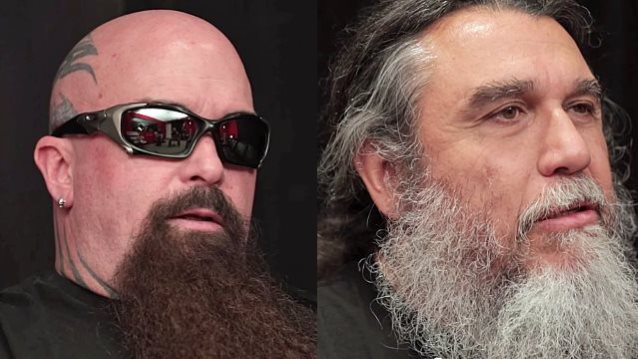 TOM ARAYA On 'Repentless': It's 'Half Of SLAYER, But It's Still SLAYER'

SLAYER guitarist Kerry King and bassist/vocalist Tom Araya spoke to U.K.'s Metal Hammer magazine about the making of the band's new album, "Repentless", due on September 11 via Nuclear Blast. You can now watch the chat below. A transcription follows (transcribed by BLABBERMOUTH.NET).

On what the hardest part was about making "Repentless":

Kerry: "I think moving forward, with the passing of [co-founding SLAYER guitarist] Jeff [Hanneman in May 2013], that was the hardest thing. I mean, we had a lot of advertisty since the last record by all means. I think, at the end of day, we had to learn how to be SLAYER again, in just a different circumstance. The first tour… I mean, yeah, we had been playing with [current SLAYER guitarist] Gary Holt [since 2011], but that was under the assumption that, at some point, Jeff would probably come back. And with the finality of Jeff not coming back, we had to see what it was like moving forward, 'cause we never had to do that. I think it was just feeling it out, I think, more for Tom and myself."

Tom: "In this band, the relationships between me and Jeff was very different than me and Kerry. It was very easy to have communication and dialog with Jeff, and not so easy with Kerry — at least between me and Kerry. And I think that has a lot to do with personalities, how we are as people. We're very 'black and white,' when you compare the two of us."

On whether the band ever contemplated calling it quits:

Kerry: "I always wanted to move forward, because this is my job; this is what I've been doing since I was seventeen. I don't know any other job. I don't know what else I would do. I don't wanna find out what I would have to do if this went away."

Tom: "We let each other know how we felt and where we stood about certain things, and we agreed that we should keep the line of communication open between us too [laughs], and that's how it's been. But, I mean, we decided that, 'All right. If things can change, if things can get better between the two of us, then let's move forward, let's go ahead and do this record."

On the writing and recording process for "Repentless":

Kerry: "You know, and then it was just getting the songs together, finding the time to record, feeling comfortable with the entire… everything about the album. And we got it done. I'm very proud of the record. I think it's everything the naysayers say it won't be."

Tom: "We started this with a different producer at the time, and everybody was involved — and including… you know, that would be JeffandDave [Lombardo, original drummer]. Then it paused. And then we picked it up again almost a year and a half later with a different producer. And it allowed time for songs to evolve, music to evolve. And when we had the finished product, I was, like, 'Oh my God! This is actually really good.' I was really surprised. You know what I mean?! 'Cause I'm not… I preferred the writing… music style of one more than the other. You know what I mean?! And, in all honesty, I wasn't sure how it was gonna be, where it was gonna go."

Tom: "SLAYER has evolved… lyrically has evolved. We've matured as lyricists. 'Cause when we started writing stuff, it was about demons and devils. And then we moved that into more of a… society… the demons and devils of society. And that's what we've matured to. Every time we work on a new record, we don't really progress, we just write great songs for eveyr record, and I think that's the important thing."

On whether fans can look forward to more SLAYER albums in the future after "Repentless":

Kerry: "I'm not done by any means. I haven't really talked to Tom about it, but this recording cycle, we had so much material, we've recorded probably another six songs beyond this record. And the reason they're not done, we didn't write lyrics for 'em yet. In my eyes, we're halfway towards another record, so I would love to have one, if not two more, after this. And that's just… You know, we're getting to a point in our lives where you don't know how many more you've got. So I would hope for one... two… three. It just depends how quickly we get 'em out. If there's another six-year gap, yeah, maybe one. [Chuckles]"

Tom: "Everything about this band is always in the now; it's on a day-to-day. It's never… We never set out and plan out what we plan to do for the future; we just take the day as it comes. Right now, it's great. The album we put together is really, really cool. I can't wait for people to hear it, because it's just… it's SLAYER — half of SLAYER, but it's still SLAYER."