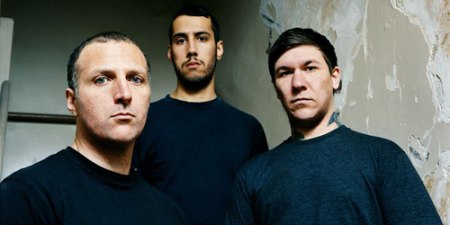 Brooklyn, New York trio TOMBS has completed work on its brand new album, "Path Of Totality", for a June 7 North American release via Relapse Records. The follow-up to "Winter Hours" was recorded at Elmwood Recording studios in Dallas, Texas with engineer John Congleton (BARONESS, EXPLOSIONS IN THE SKY, BLACK MOUNTAIN, ST. VINCENT). It will be made available on CD, 2xLP, and digitally and features artwork from Thomas Hooper of Hoopers Electric.

In other news, TOMBS has announced three-weeks of U.S. tour dates surrounding the band's appearance at the South By Southwest festival. The band will tour down to Texas with CASTEVET and return through the South and East Coast with WORMROT.

TOMBS recently released a 14-songs collection of early material, tracks from split releases, and previously unreleased demos. Titled "Fear Is The Weapon", the collection is strictly limited to a one-time pressing of 1,000 copies and is available exclusively through Relapse mailorder.

TOMBS' latest album, "Winter Hours", was released in February 2009 via Relapse Records. The CD was recorded at the Etching Tin Studios in Richmond, Virginia with engineer Ian Whalen.