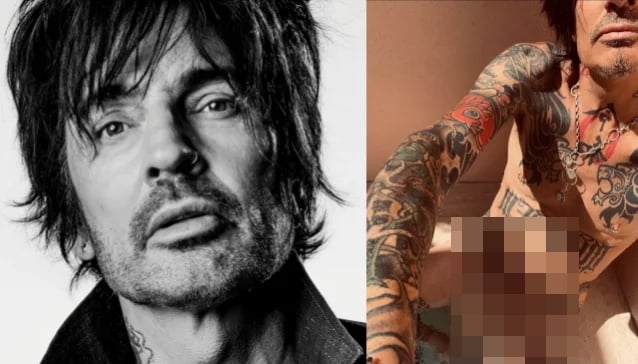 TOMMY LEE Joins OnlyFans: 'I Have Now Gone Over To A Place Where You Can Be Free As F***'

Lee made the announcement while speaking to the crowd at the final concert of CRÜE's "The Stadium Tour" Friday (September 9) at the Allegiant Stadium in Las Vegas.

Referring to the fact that he posted a nude photo on social media last month, Tommy said: "In case you guys are fucking living under a rock, I've been in trouble a little bit lately." The nude photo, a selfie of Lee from the face down, was posted alongside the caption, "Ooooopppsss," before it was taken down from Instagram and Facebook.

"I wanna see what kind of trouble we can get into tonight. We are in fucking Las Vegas, right? And I think that we should dispel that fucking bullshit 'What happens in Vegas stays in Vegas.' Fuck that. Let's fucking share it with the world."

Lee then urged the men in the crowd to show their penises before addressing the fact that his graphic photo was removed from the Meta-owned platforms.

"I showed you my shit," he said. They took it down off the Internet. No more dicks, no more titties. What I've done is I have now gone over to a place where you can be free as fuck. And you can show anybody whatever the fuck you want, and they don't fucking take it down." He then turned his back to the audience, bent over and pulled down his pants to reveal the words "Only Fans" written on his butt cheeks.

Last year, OnlyFans, where sex workers, influencers and celebrities charge subscribers for access to photos and videos, sparked outrage when it announced it would ban "sexually explicit" content. The platform backtracked within days, "suspending" its policy change following "assurances" from banks that adult content would not be penalized.

OnlyFans, which takes a 20% commission fee from creators, generated around $4 billion from its two million content creators in 2021.

Lee's controversial graphic image, which showed the heavily tattooed musician naked while sitting on the edge of a tub, was up for at least four hours, which was described by one Twitter user as "an insane amount of time."