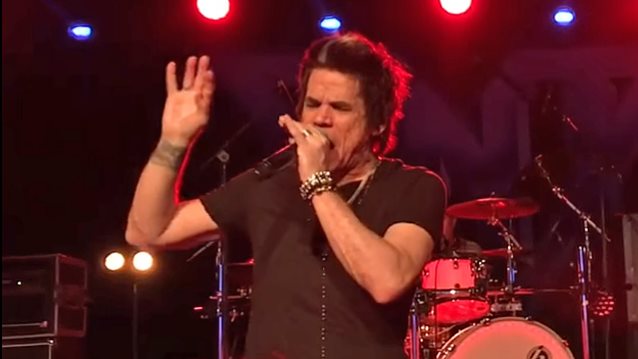 Reunited Norwegian/American hard rockers TNT have resumed work on their new studio album, due later in the year via Frontiers Music Srl.

In 2016, singer Tony Harnell and guitarist Ronni Le Tekrø started writing new TNT material together for the first time in over ten years.

Harnell rejoined TNT in May 2016, less than a year and a half after his most recent departure from the group.

Speaking about what keeps him coming back to TNT after all these years, Harnell — who spent eight months fronting SKID ROW in 2015 — told Radio Trondheim in January (hear audio below): "It's really funny, because I think that what people think about that is not really correct. So, I think it's really just a matter of there's always been a time where it seemed like a good idea to take a break at times, and I think it's been ultimately good for the band, really, to take breaks and then come back together again. Like right now — we're selling out all the shows. What if we didn't take a break for the past couple of years and we kept going, would this be happening or would people lose interest?"

According to Harnell, interpersonal conflicts within TNT "get blown out of proportion." He explained: "There's really not any major problem between any of us. It's just a matter of, we work for a while, and then we say, 'Ah, this isn't really the way we want it to be, exactly, so then we kind of go our separate ways and we come back together. But we always come back together for the music, because we have all these songs we worked on together. Ronni and I wrote all these songs over the last thirty-five years or something, and Diesel was a part of the original lineup and he's been there from the very beginning and actually was one of the people that created the band. And [original TNT frontman] Dag Ingebrigtsen, of course."

The singer went on to say that he is once again deriving enjoyment from performing with TNT, something that hasn't always been the case. "I think that's part of it. I think when I'm not having fun anymore, that's the break time," he said. "And when I come back, I think, 'Oh, do I wanna do this again?' But as soon as I get in front of the people and I see how much they love the songs, it makes me like the songs again. If I just listen to them when I'm learning them again for the tour, which I don't prepare very well… but when I do listen through the songs, I think… there's, again, a love-hate thing of going, 'Oh, gosh! I have to sing these again.' But when I get in front of the people, I learn to love the songs again, because I see how happy they get. [That's when I realize] these are actually pretty good songs."

Harnell last quit TNT in January 2015 after a fifteen-month stint with the band, explaining that he "had really high hopes that it would last this time and that we would continue for years to come, but it is a very volatile little machine." He later told "The Classic Metal Show" that he "never actually got grooved back in with the band" and that he and his bandmates hadn't come to an agreement about how to "operate as a band." He explained: "We had no plan in place. Was I gonna be a hired gun in my own band? Was I gonna come back into the company? I mean, there were a lot of questions to be answered."

He continued: "I wanted to stay in the band for the rest of my music career; that was my goal. I said, 'Okay, this is it. We can make this work.' People wanted the band. There were people all over the world that wanted to book the band and that were excited we were back together… We were all in it for the long haul, and I tried to make it work for that. But when September [2014] came and the touring ended, nobody wanted to talk to me anymore, and my calls were not being returned, and my e-mails were not being returned by the most important people in the band that had the most influence. And the manager that came in to quote 'save the day' actually sunk the ship."