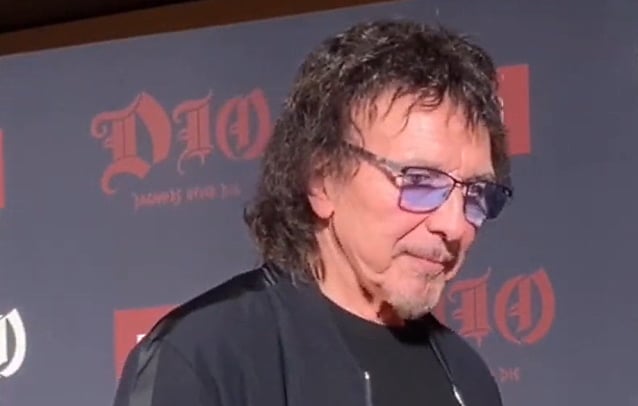 BLACK SABBATH guitarist Tony Iommi was among the attendees at the London premiere of the first-ever career-spanning documentary on the life and times of legendary metal icon Ronnie James Dio, which was held Monday night (September 26) at the Curzon Soho Theatre. Speaking to TotalRock on the red carpet of last night's event, Iommi said about his late SABBATH and HEAVEN & HELL bandmate (as transcribed by BLABBERMOUTH.NET): "You know, the thing is he loved his fans. Many times we'd say, 'C'mon, Ronnie. We've gotta go.' And he'd always see everybody. I mean, you can't always because you have to leave; you've gotta get the flight or you've gotta do this and that. But he'd always give them time. And he loved his fans; it was everything to him. He loved what he did. And he was a real professional. And that's one of the things I really liked about him as well. You'd know he'd go on stage and he'd be able to do it and put it on. He wouldn't pull anything out; he wouldn't cancel anything. He'd go on and do it."

"Dio: Dreamers Never Die" will be presented in more than 500 cinemas worldwide by Trafalgar Releasing and BMG for two days only on Wednesday, September 28 and Sunday, October 2. Executive-produced by Dio's widow and longtime manager Wendy Dio and fully authorized by the artist's estate, "Dio: Dreamers Never Die" delves deep into the singer's incredible rise from a '50s doo-wop crooner to his early rock days in ELF and Ritchie Blackmore's RAINBOW, to replacing Ozzy Osbourne in BLACK SABBATH, and finally cementing his rock star status with his own band, DIO. The film incorporates never-before-seen footage and personal photos, as well as offering intimate scenes with his closest peers, family, and friends, among them Wendy, Iommi, Geezer Butler, Glenn Hughes, Vinny Appice, Lita Ford, Rob Halford, Sebastian Bach, Eddie Trunk and Jack Black, as they bring viewers inside the life of one of rock and roll's true heroes and one of the most beloved figures in rock.

Iommi previously reflected on his time recording and touring with Dio as his bandmate in both BLACK SABBATH and HEAVEN & HELL in an April 2021 interview with Rockin' Metal Revival. At the time he said: "The last tour we did with Ronnie was real precious, and we had such a great time. And we really bonded. The last generation of the period with Ronnie was really close — everybody was close. Yeah, Ronnie was such a really nice person.

Ronnie's long-awaited autobiography, titled "Rainbow In The Dark: The Autobiography", was released on July 2021 via Permuted Press.