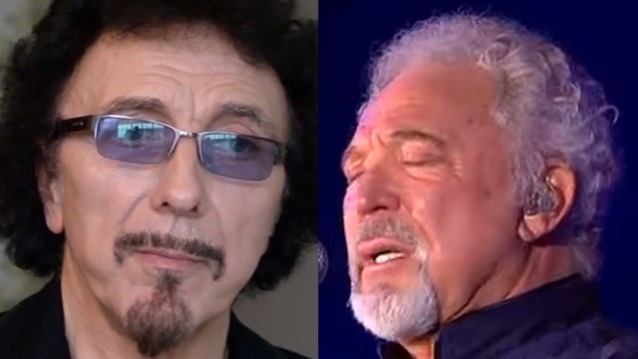 TONY IOMMI Says He Would Like To Collaborate With TOM JONES

Legendary BLACK SABBATH guitarist Tony Iommi says that he would "like to do something with" Welsh singer Tom Jones — 26 years after such a collaboration was the subject of an April Fool's joke perpetrated by a British magazine.

The spoof news story, which was published in Kerrang!'s April 1988 issue, suggested that Jones had joined BLACK SABBATH for a concept album based on a mythical monster visiting a Welsh pit village on the road, and the accompanying Minotaur/Miner Tour.

Though the whole story was nothing more than a gag, it sparked a conversation between Iommi and Jones which led to the two men mulling the possibility of doing something together in the studio.

"I've met Tom a few times," Iommi told Classic Rock magazine, adding, "We were talking one day and he said, 'Did you ever see that thing in the press about me joining you guys?' I said 'Yes, I did,' and he said, 'It's not a bad idea, is it?'

Iommi has said that BLACK SABBATH's massive July 4 gig at London's Hyde Park could end up being the band's last because the touring can be tough on him. But in a recent video message, Iommi sounded more optimistic about the prospect of returning to the road, telling fans, "We'll see you on the next tour."

"13", the first SABBATH album since 1978 to feature Iommi, singer Ozzy Osbourne and bassist Geezer Butler, was No. 1 in the U.S., the U.K. and nearly a dozen other countries.