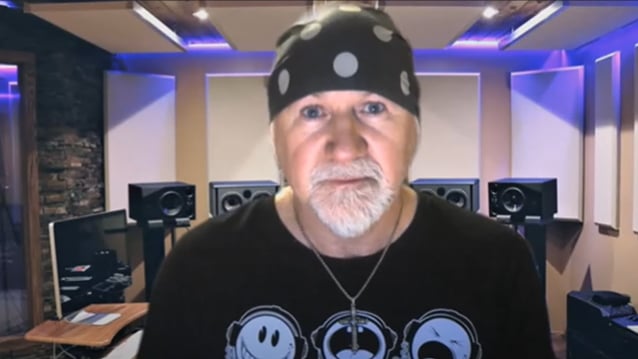 TONY MARTIN Says A Box Set Of His Recordings With BLACK SABBATH Will Arrive This Year: 'It Won't Be Individual Albums'

During an appearance on "The Ron Keel Podcast", former BLACK SABBATH singer Tony Martin confirmed that a new record deal has been secured to reissue the albums he recorded with the band. "I only found out yesterday," he said (as transcribed by BLABBERMOUTH.NET). "I had no idea. You don't get information very much from the SABBATH camp, really; they're very protective of their thing. So I only found out yesterday that they've now got a record deal for them. And I don't know what date they're planning on to release this stuff, but it's this year. And what I do know is that it won't be individual albums; it'll be a box set of the Tony Martin era. But they've got a deal for it now, and that was always the problem before — it's not out there and you can't get it because it's not on sale. And similarly, you don't get royalties — I don't get paid a penny from the sales 'cause it's not on sale. So why would you? But now if that all changes and this year they manage to get that released, oh, man — there's gonna be a lot of Tony Martin stuff out there."

Martin also reflected on his time with SABBATH, saying: "It doesn't haunt me. It's not a bad thing. I've got a lot to be grateful for. SABBATH is the reason why you, and the world, knows about my voice. So there are things to be grateful for. It was hard work for me. I'm 12 years younger than the rest of the guys, so even just circle of friends was different — they're hanging out with Ian Gillan and Brian May, and my best friend is Dave down the road. So that was a gap. And also the experience — they were way ahead of me in experience, at least 12 years further up the road from me, and I never could quite catch them up; they will always have that much more experience than me. So that was hard work."

He continued: "When I first got the gig, it was actually 1986 that I was put on standby when they were with Glenn Hughes on the 'Seventh Star' album. And I don't know what the issues were, but something went wrong with Glenn and they put me on standby. That scared me to death, 'cause it's Glenn Hughes. I can't sing like Glenn Hughes; nobody can sing like Glenn Hughes. Only Glenn Hughes can sing like Glenn Hughes. So that was really scary. Then they got Ray Gillen in. Then he left — he left to join BLUE MURDER with John Sykes, so they called me again and said, 'You'd better come down to the studio and try this out.' And they gave me one song, which was 'The Shining' off 'Eternal Idol', and then two days later said, 'Okay. You've got the job. You've got a week to finish the album.' So right from the start it was scary — it was huge; suddenly being the frontman of BLACK SABBATH was just ridiculous. And yeah, the whole association with me and my voice lasted 11 years."

Earlier in the month, Martin discussed the possibility of the LPs from his era of SABBATH being reissued in an interview with Canada's The Metal Voice. At the time, he said: "We had a guy in BLACK SABBATH called Geoff Nicholls. He was the keyboard player. He died four years ago. And when we [were] at Geoff Nicholls's funeral service, I bumped into Tony Iommi there, and he said, 'I've got loads of stuff to play you. And we have to get together and see if we can write some new songs. And then maybe we can re-release the Tony Martin-era albums.' And I thought, 'Well, that's cool. Okay. Whatever.' Then the phone went dead for ages — months and months and months and months. So I called him back and he said, 'Come over to the house and we'll talk about it.' So I said, 'Okay.' So I went to his house and he said, 'We can't do it.' And I went, 'What?' He said, 'We can't do it.' I said, 'Why not?' He said because there's an agreement with the guys of SABBATH that they can only release something [new] under the SABBATH name if it's the original SABBATH members. Nobody else can record anything [new] under the SABBATH name…. What he said was what we can do is reissue the albums. We can't add anything to it. So what we're expecting, if he ever gets around to it, is for the Tony Martin-era albums, apart from 'Eternal Idol', 'cause that's owned by someone else, to be reissued. Remixed probably in the case of 'Forbidden', but I think it'll just be as it was… [We can add] only stuff that's already been recorded at the time."

According to Martin, he has already found loads of recordings in his personal collection that would be perfect for inclusion on proposed issues of the SABBATH albums from his era of the band.

"I've searched through… I've got hundreds of tapes — things from the writing sessions," he said. "I've got the tapes when Eddie Van Halen was with us writing on 'Cross Purposes'. I sent that over to Tony. That appeared on YouTube; I don't know how that got out. But I've got all sorts of stuff like that. And I thought that was the kind of thing that they would reissue the albums with. But I have no idea. You probably know more than me."