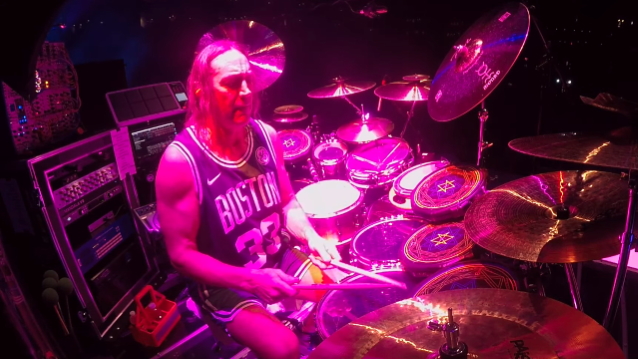 Vic Firth has uploaded video footage of its signature artist Danny Carey of TOOL performing the song "Pneuma" with his bandmates last November in Boston, Massachusetts. Check out the clip below.

On its current tour, TOOL has been playing two-and-a-half hour sets, with vocalist Maynard James Keenan spending the entirety avoiding the spotlight, singing mostly from the shadows, on a set of risers at the back of the stage.

The setlist draws from all of TOOL's five albums, with 2019's "Fear Inoculum" and 2001's "Lateralus" getting around four songs each.

The band is promoting "Fear Inocolum", which came out in August.

TOOL was honored with a Grammy in the "Best Metal Performance" category in the pre-telecast ceremony at the 62nd annual Grammy Awards in late January at Staples Center in Los Angeles. TOOL was nominated for "7empest", a track from "Fear Inoculum".