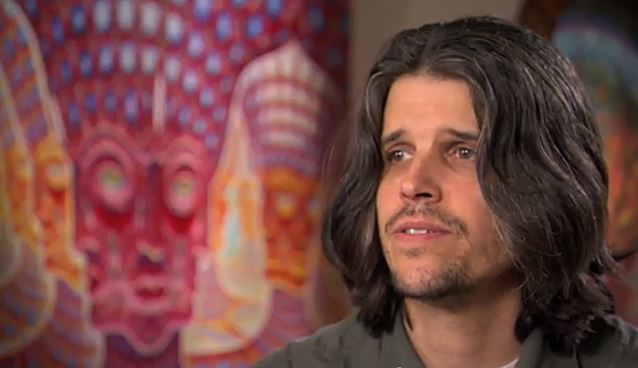 According to The Pulse Of Radio, TOOL guitarist Adam Jones got married last month to artist Korin Faught in a ceremony that took place in San Francisco. Although they got hitched in July, the news was not revealed until Wednesday night (August 28),when a photo of the couple was posted on Jones' official Facebook page with the caption "Mrs. Jones <3 July 6th 2013." A photo of the Joneses from the wedding was also posted at the guitarist's Instagram account.

The couple are also expecting their first child, which Korin revealed via her own Instagram page with a picture of her baby bump and the caption "#bumpwatch."

Jones proposed to Faught last January while ringside at the WWE Royal Rumble showdown in Phoenix. Just before the Royal Rumble went on the air that evening, a message appeared on the WWE's giant "titantron" video screen, saying, "Korin, Adam Jones wants to ask you something... 'Will you marry me?'"

With cameras surrounding them, Jones produced a ring and waited for Korin's answer — which luckily for him was "yes."

Meanwhile, drummer Danny Carey recently said that TOOL could have its first album since 2006 completed by the end of this year and in stores in 2014.

Despite the long wait and slow pace of work on the record, Jones told The Pulse Of Radio a while back that TOOL's creative process is relatively simple. "We write this song, and then we write the next song — we don't really, like, you know, go, 'Okay, well, now we're gonna write the radio song,' or 'Now, we're gonna write this song,'" he said. "You know, we just write and then put 'em in an order that we like after we've recorded them and then get a feeling from all the songs in the group and then try to attack the propaganda of selling the record."

TOOL's last album, "10,000 Days", came out in 2006. Since that time the band has toured almost every year, while singer Maynard James Keenan has tended to his Arizona vineyard business and recorded several albums with PUSCIFER.