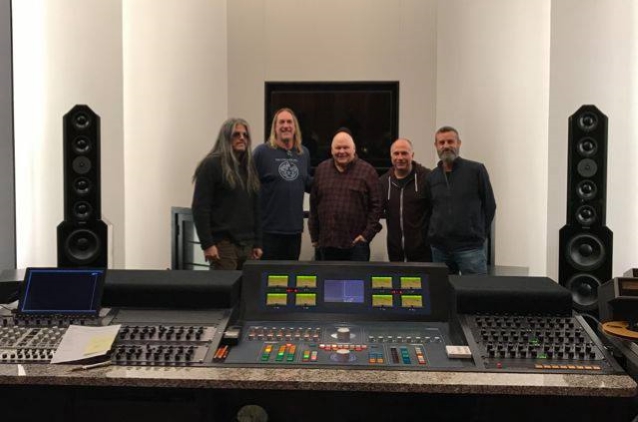 TOOL's New Album Is Being Mastered By BOB LUDWIG

TOOL appears to be finalizing the mastering of its long-awaited new album.

Although unconfirmed, it appears that the picture was taken at Gateway Mastering Studios in Portland, Maine. Ludwig mastered "10,000 Days" at the same facility.

Keenan's comments came a month after Carey told a fan at the NAMM show in Anaheim, California that "the plan" was for the group's new LP to come out "mid-April."

Carey has made other predictions before about TOOL's fifth full-length album, including saying at one point in late 2017 that the record would be out in 2018. TOOL officially entered the studio in March 2018 to begin recording its first full-length album since 2006's "10,000 Days", with Keenan tweeting in January that he had finished laying down his vocals "months ago." The band has a number of festival appearances already booked in May and June.

Maynard attempted to explain the long gap between TOOL albums in a 2017 interview with "The Joe Rogan Experience". Speaking about his bandmates, the singer said: "Their writing process is so drawn out. And I'm sure there's a lot of reasons why the delay has been long. Their process is very analytical, and I think, at some point, maybe because so much time has gone by from the last album, there has to be a little bit of fear in here. [You think to yourself] 'Is this record gonna be as good as the last one?' The anticipation now is… Now the pressure is huge, so I'm sure there's some of that [that] goes into play."

Keenan spent part of 2018 touring with A PERFECT CIRCLE, whose first album in 14 years, "Eat The Elephant", came out last April.