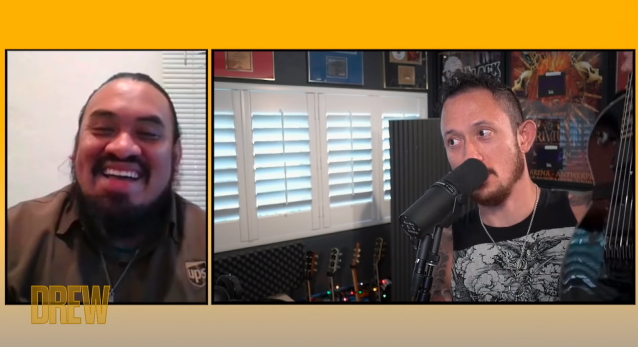 Gibson brought Matt Heafy of the rock band TRIVIUM and "The Drew Barrymore Show" together to gift a guitar to community hero, UPS driver Hector Velasco. Hector received a Gibson Les Paul classic guitar in ebony, similar to the one owned and played by Heafy, the frontman of his favorite metal band.

Velasco appeared on "The Drew Barrymore Show" to discuss his recent good deed which resulted in a viral video. The UPS employee's daily route takes him through Langston Walbuck's neighborhood in Los Angeles. He noticed that the little boy would wait on the family's balcony every day and seemed to look disappointed that there was never a package for him. Deciding to remedy the situation, Hector contacted Langston's parents to get the boy's name, and delivered a special package filled with toys and candy to him.

Velasco explained to the Walbucks why he was moved enough to want to deliver the package to their son: "the world didn't give my wife and I any boys... gave us two beautiful girls... Your son taught me a lesson that it's not only my kids going through this pandemic. You do your best to show them you're not alone, we're all here together."