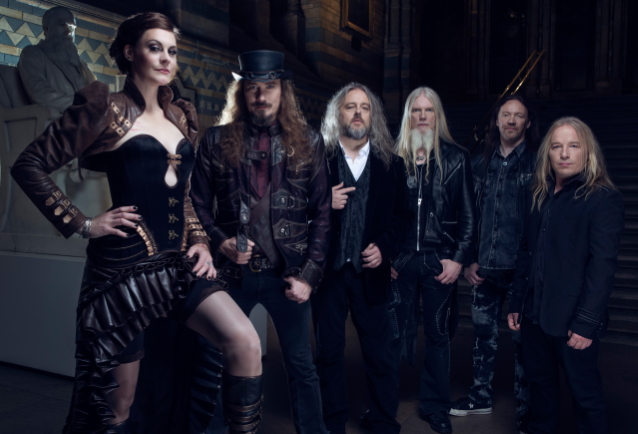 NIGHTWISH keyboardist and main songwriter Tuomas Holopainen says that Marco Hietala's decision to leave the band "came as a bit of a surprise."

The bassist/vocalist announced his departure from NIGHTWISH in January, explaining in a statement that he hadn't "been able to feel validated by this life for a quite a few years now."

Holopainen spoke about Hietala's exit from NIGHTWISH in a new interview with Finland's Kaaos TV. He said (as transcribed by BLABBERMOUTH.NET): "Marco informed us in December last year [that he was leaving the band]. And even though he has been very open about his state and problems during the past years, it still came as a bit of a surprise for us. So it was a really tough pill to swallow. And for a few days, I was actually quite confident that there's no coming back, that this is it. I remember talking to Emppu [Vuorinen], the guitar player, and we were, like, 'You think this is it?' 'Yeah, I think this is it.' I mean, enough is enough. So much has happened in the past. Something that broke the camel's back, as they say. Then, after some time had passed — a few days — we started to think that it's been such a ride of 25 years, with so many ups also, that this is not the way to end it."

Holopainen also confirmed that NIGHTWISH's future setlists will likely also be affected by Hietala's absence from the group. "There are some songs that are so profilic [sic] to Marco that we cannot do them, I think, ever again," he said. "I'm not absolutely certain, but, for example, 'The Islander', 'While Your Lips Are Still Red' and definitely 'Endlessness' from the new album is something that cannot be performed without Marco. But then, after spending five days in the rehearsal room, there are some songs that actually work surprisingly well without Marco, that Floor [Jansen] or Troy [Donockley] is doing [Marco's] parts. And I was a bit suspicious about that, but then when I heard the new arrangement for those parts, I was, like, 'Yeah, I think this actually might work.'"

Last month, Holopainen said that the name of Hietala's replacement will not be revealed until "a few hours" before the first of the band's two interactive "An Evening with Nightwish In a Virtual World" concert experiences that will kick off the "Human. :II: Nature." world tour.

NIGHTWISH will perform in a tavern called "The Islanders Arms" built in a virtual world for two nights — Friday, May 28 and Saturday, May 29, 2021. On both nights, the fans will experience an unforgettable one-and-a-half-hour performance, hearing songs live off the latest album, "Human. :II: Nature.", for the first time ever. These two nights will have their own, slightly different setlists.