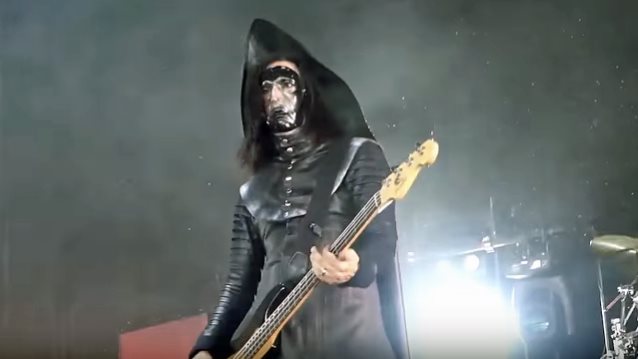 Marilyn Manson has fired his longtime bassist Jeordie White, who performs under the name Twiggy Ramirez.

The news comes less than a week after White was publicly accused of rape by his former girlfriend, Jessicka Addams of the riot grrrl band JACK OFF JILL.

Jeordie has yet to respond to Addams's October 20 Facebook post in which she detailed the physical and psychological abuse in addition to rape while they were in a relationship in the 1990s — a relationship that Addams described as being exceptionally turbulent.

Earlier today, Manson released a short statement via his social media accounts, saying simply: "I have decided to part ways with Jeordie White as a member of MARILYN MANSON. He will be replaced for the upcoming tour. I wish him well." On Instagram, Manson added: "This is a sad day."

White released a statement of his own, writing: "I wish to spend this time with my family and focus on maintaining my several years of sobriety. I will be taking a leave of absence from MARILYN MANSON and regrettably will not be performing on the upcoming tour."

Although the events Addams described happened over twenty years ago, she said she did not go public out of shame and fear that it could damage her band's career.

She later alluded to White's behavior in a 2015 interview, but she said she finally opened up now in solidarity with other women who are coming forward with stories of sexual harassment and abuse in the wake of the many allegations made against film producer Harvey Weinstein.

He has also played with A PERFECT CIRCLE and NINE INCH NAILS in addition to MANSON.

After the initial allegations against White came out, Manson issued a statement saying: "I knew Jessicka and Jeordie had a romantic relationship many years ago and I considered and still consider Jessicka to be a friend. I knew nothing about these allegations until very recently and am saddened by Jessicka's obvious distress."

Manson is next scheduled to perform on November 5 at Ozzfest Meets Knotfest in Devore, California.

I have decided to part ways with Jeordie White as a member of Marilyn Manson. He will be replaced for the upcoming tour. I wish him well.