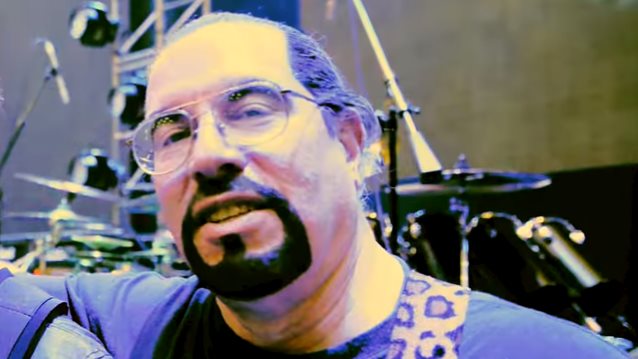 Asked if he is bothered by some of the things Dee says in interviews, the TWISTED SISTER bassist told Zoiks! Online (hear audio below): "Do I like when he does things like that? No. But just like he doesn't tell me what to say, I don't tell him what to say.

"I happen to know Paul Stanley very well, because I happened to actually play some gigs with his son, local gigs. I helped out his son a few times, and I spoke to him on the phone. And when it happened, we actually bumped into each other on the phone. And he goes, 'Really, it has nothing to do with you.' And I said, 'Listen, I really don't care, because in a week or two, no one's gonna remember it even happened. I really don't care. If you've got a problem with Dee, and you wanna say it's the whole band, then you can say whatever you want. I really don't care.' So he told me… he's, like, 'You're a great guy. You're a good guy, and I certainly appreciate you looking after my son.' And there was no problem with it."

He continued: "I really don't care what anybody says, as long as they don't say that it's a band statement, which nobody says. If we do interviews, and somebody asks us our personal feel on something, we all agree that we have to say that it's my personal feeling and I'm not representing the band or anything. And Dee didn't represent the band. He represents himself. Whether he was goofing on JUDAS PRIEST, or KISS, or anybody else, he'll always take the licks. He always says that: 'I'll fall on the sword if I was wrong.' Or, 'I'll challenge the person.'

"No, it really has nothing to do with the whole band. I really don't care what people say on their own."

Stanley responded to Snider's original comments in an interview on Chris Jericho's "Talk Is Jericho" podcast, calling Dee "a wannabe" who "desperately wants attention and to be taken seriously." He added: "That will never happen because he's obviously clueless that he and his whole band are a bunch of buffoons."

Snider later defended his take on the 2016 version of KISS, telling "The Real Radio Show": I don't think I'm out of line to say that I have an opinion and that I feel that the Ace Frehley impersonator playing guitar now is an insult to fans. People disagree — that's fine. People agree — that's fine. But Paul reacted to me making a statement [saying] anything negative about KISS.

"Paul, I love your band, I love your music. Why do you have to be such a dick? Alice Cooper is not a dick. Alice Cooper has inspired a million people and he's the coolest guy in the world. Yet Gene [Simmons] and Paul, they've got this arrogance about them."

Snider previously responded to Stanley's comments by writing an open letter to the KISS frontman in which he accused Paul of being "oddly threatened" by him an insisting that he would "bury" Stanley in a hypothetical "old-school" rock battle, featuring " no costumes, no pyro [and] no bullshit."