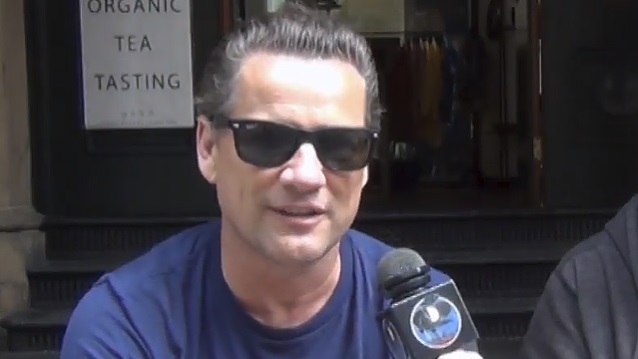 UGLY KID JOE Vocalist On 'Everything About You': 'We Probably Wouldn't Be Talking Without That Song'

UGLY KID JOE frontman Whitfield Crane recently spoke with Australia's Spotlight Report about the 25th anniversary of the group's double-platinum full-length debut "America's Least Wanted". The full chat can be viewed below. A few excerpts follow (as transcribed by BLABBERMOUTH.NET):

On the how the group's musical abilities have improved over the years:

Whitfield: "It's a different moment in time and space. When we were kids and had all the success, we weren't really a good band. The band wasn't that good as a band, which is fine, but we had truthful energy and we caught a wave and took it around the world. By the time we got to 'Menace To Sobriety', we became a great band. 1995, when we got Shannon Larkin, that band became a great band. Now we're at a moment where it's been 25 years since 'America's Least Wanted', and we've put that band back together. It feels cathartic; it feels good. The band's tight; it's just [in] a different form, and probably a form of the band that has better chops."

On the group's rapid ascent:

On the ubiquity of the group's best-known song, "Everything About You":

Whitfield: "There's a duality to it. In a gratitude formation, it's the very song that took us around the world, and we probably wouldn't be talking without that song. From our artistic dimension, you know if you know this band, there's more dimensions to the band. At this point, it doesn't matter. It mattered to me more in 1995 than it does now. I'm just excited to go sing songs. In 1995, I didn't want to sing that song anymore. Now, I realize, 'I'll sing that song — it's all good.' Everything's got two points of reference, and at this point, I celebrate both."

In December, UGLY KID JOE will embark on an five-date Australian tour to commemorate the twenty-fifth anniversary of "America's Least Wanted". They will be joined on the trek by former guitarist Dave Fortman, who went on to become a successful record producer for the likes of SLIPKNOT, EVANESCENCE and ANTHRAX.

UGLY KID JOE's latest full-length album, the Fortman-produced "Uglier Than They Used Ta Be", was released in North America in October 2015 via Metalville/UKJ Records.