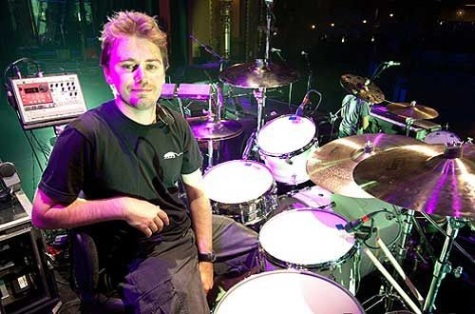 A member of RADIOHEAD's crew who was killed on Saturday (June 16) when a stage collapsed before the band's scheduled concert in Toronto that evening. 33-year-old drum technician Scott Johnson died when the top portion of the stage fell on him as he was setting up the band's equipment.

Johnson also worked as a crew member for other British bands, including URIAH HEEP, KEANE and WHITE LIES. URIAH HEEP posted at its web site that they "were all saddened to hear the news from Canada that Scott Johnson has died while working on the RADIOHEAD tour. Scott had previously been a member of the URIAH HEEP technical crew, and we all recognized Scott's consummate professionalism, and cheerful disposition, as he effortlessly dealt with life on the road. We are gutted, and our thoughts are with Scott's friends and family."

Three other people were injured in the incident, which happened just one hour before the gates at Downsview Park were scheduled to open and let concertgoers in. The concert was subsequently canceled.

According to BBC News, a team of inspectors and engineers have begun searching through the still unstable wreckage to try and establish what caused the stage to collapse.

This is the latest in a series of stage collapses that has happened over the past few years at North American concerts, including an August 2011 incident in Indiana where five people were killed while waiting to see SUGARLAND.