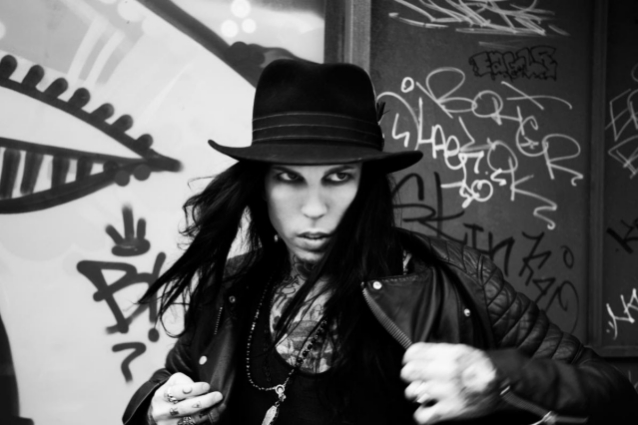 After a five-year hiatus, Las Vegas-based horror rockers VAMPIRES EVERYWHERE have returned with their new track "Witch", having been freshly signed with Cleopatra Records. Not only that, but the band has also announced a new string of fall 2021 tour dates.

Speaking on the news, frontman Michael Vampire shares: "I am super proud of 'Witch', our first single off our upcoming EP on Cleopatra Records, 'The Awakening'. Me and Craig Pirtle (my guitar player) set out to write an album based on our love of 808s, the emerging shift in rock culture and goth rock. We wanted to stray far away from our last musical endeavor with DGA and write something purely based on our love of music. We didn't want to focus directly on radio and took a more organic approach to the writing. It's been over six years since I screamed in that specific tonality and knew it would be special. We decided to write all the songs on 'The Awakening' based on synth beat lines. We wanted the beat of the song to tell the story before I even laid down the vocals. I can say it's been a massive learning experience writing like that and I found it super refreshing! I also wanted to focus on the sound all the fans are used to and loved throughout the band's past 11 years. When you listen to the EP as a whole, you will instantly feel VAMPIRES EVERYWHERE nostalgia with a fresh twist of 2021! I wanted an album my fans would love but also wanted to keep things up to date and fresh feeling. Nothing is worse than dated rock music!!!

"I am excited to announce VAMPIRES EVERYWHERE has signed to the iconic Los Angeles-based record label Cleopatra Records! Cleopatra is known for its eclectic roster and legendary artists ranging from MEGADETH and SMASH MOUTH all the way to DMX (RIP). I am very grateful to be part of the Cleopatra family and stoked that they believe in my vision. Cleopatra has kept the goth scene alive for decades and it's an honor to be a part of their amazing legacy! Great things to come!"

VAMPIRES EVERYWHERE fans will have the chance to catch the band on the road this fall with ASSUMING WE SURVIVE, THE BUNNY THE BEAR and FATE DESTROYED.

VAMPIRES EVERYWHERE was conceptualized in early 2010 by Michael Orlando, later known as Michael Vampire. The band started its journey in Hollywood, California based on the idea of bringing a fresh feel to an already saturated metalcore market. Michael has been obsessed with the 1987 cult classic film "The Lost Boys" since age 13 and wanted to start a band around his love for the movie and his passion for rock music. The band quickly gained notoriety in 2010 with its debut music video for "Immortal Love" which hit half a million views and landed on the iconic MTV "Headbangers Ball". A few months later, VAMPIRES EVERYWHERE was signed to Century Media Records and toured with BLACK VEIL BRIDES on the Hot Topic tour around the United States. The band also landed an opening spot for X JAPAN's first North American run, playing for over 5,000 people a night, and to this day is the only band to open for X JAPAN in the U.S. After an amazing run on the 2012 Warped Tour, the band was asked by Kevin Lyman to headline Rob Zombie's Great Adventure in Pomona, California. VAMPIRES EVERYWHERE have since toured with the likes of MOTIONLESS IN WHITE, AIDEN, ALESANA, ORGY, FILTER, FALLING IN REVERSE, and countless others. 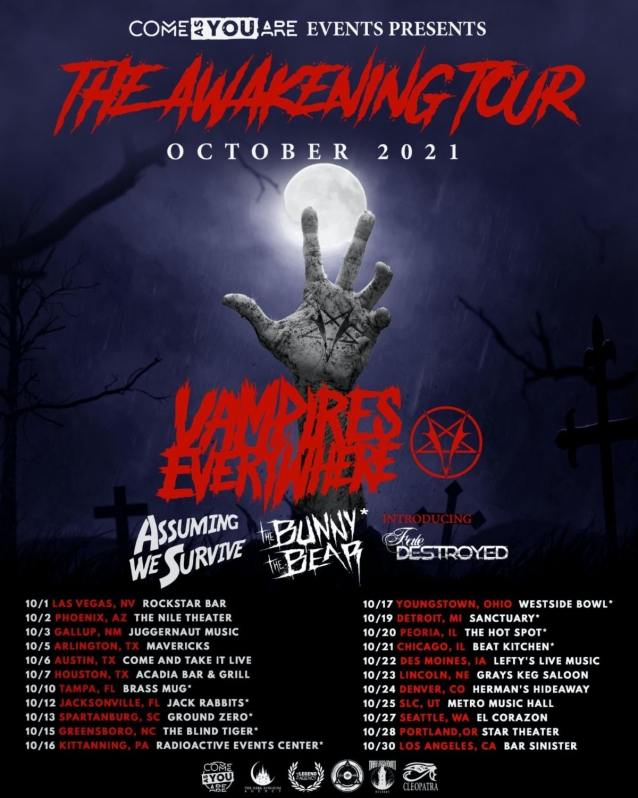