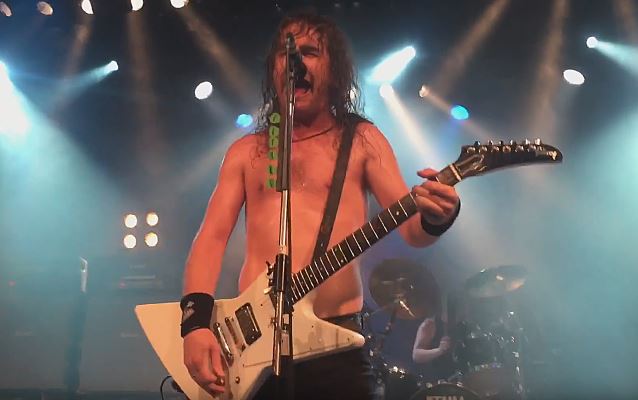 Joel O'Keeffe of Australian hard rockers AIRBOURNE injured his leg when he fell off the stage during the band's September 22 concert in Kamloops, British Columbia, Canada. The incident happened during the encore song "Running Wild" while O'Keeffe was in the middle of his guitar solo.

O'Keeffe was picked up by the band's crew, who brought him back to the stage and held on to him (out of view) while he finished the song. They eventually brought out a chair for him to sit on while he completed the set.

Fan-filmed video footage of the incident can be seen below.

Joel recently told Spotlight Report that staying true to the old-school rock sound comes naturally to AIRBOURNE: "I think it's mostly because we are a bunch of blokes who love rock and roll," he said. "We feel it and we play it for people like us — people who are into the same music of us. That's why it's so awesome to see fans at our shows with IRON MAIDEN, AC/DC and JUDAS PRIEST shirts, for example, because those are bands we love and grew up with and that's the kind of sound we will play until the end."

Joel also offered his opinion on AC/DC's decision to carry on touring with Axl Rose as the replacement vocalist, filling in for the ailing Brian Johnson. He said: "[Their] tour is called 'Rock Or Bust', and that's exactly what the guys are doing. They did not choose to be in that situation, but they are still going at it. Now, Cliff [Williams, bass] just announced he is leaving too, but Angus [Young, guitar] said they will continue touring. That's the spirit! Regarding Axl Rose, I haven't personally seen the shows with him, but friends who were lucky enough to see the gig told me it was spectacular."