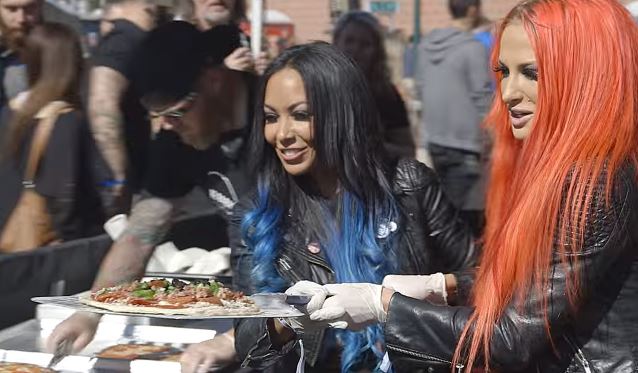 APTV joined forces with BUTCHER BABIES frontwomen Heidi Shepherd and Carla Harvey at Monster Rock Allegiance for some fun with food. Kathy Wimmer of Pie Baby let them try their hands at making a pizza appropriately named "The Butcher Baby."

BUTCHER BABIES' second album, "Take It Like A Man", was produced by Logan Mader, who has previously worked with FIVE FINGER DEATH PUNCH, DEVILDRIVER, CAVALERA CONSPIRACY and GOJIRA. Carla stated about the CD's musical direction: "The majority of the album is very aggressive thrash metal. On this album, we wanted to go back to our roots, which were aggressive thrash, and ninety percent of the album is that."