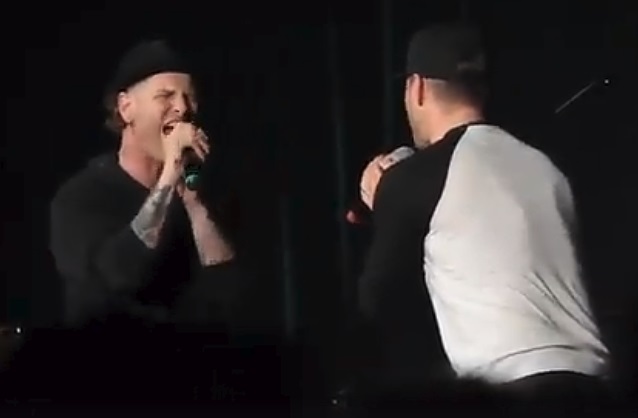 SLIPKNOT and STONE SOUR frontman Corey Taylor joined "Supernatural" star Jensen Ackles on stage this past weekend in Las Vegas at the official convention for the science-fiction television show to sing the BON JOVI classic "Wanted Dead Or Alive". Video footage of their rendition can be seen below.

Taylor tweeted after the performance: "I'm still shitting myself. Thanks to the whole #SPN crew and the whole cast for being so [good] to me. Lifelong fan - SO AWESOME!!!!!"

On his Instagram account, Ackles, who plays Dean Winchester on "Supernatural", posted a picture of the him and Taylor performing, along with the caption: "Go to Vegas and pretend you’re a rockstar next to an ACTUAL rockstar. Check and check! Thanks Corey Taylor for coming to play. You killed it bro."

Taylor had previously performed "Wanted Dead Or Alive" during his solo tours.

STONE SOUR is on a short break from touring in support of its sixth studio effort, "Hydrograd", which came out last June.

Taylor revealed earlier in the month that guitarist Josh Rand will rejoin STONE SOUR on April 27 at the Welcome To Rockville festival in Jacksonville, Florida. Rand came off the road late last month and was said to have entered "treatment" for unspecified issues. Taylor told Musik Universe that the band talks to Rand "every day" and that he is "doing great."

Taylor confirmed in December that he has been separated from his wife for almost a year and just recently started a new relationship.

Last night was a dream come true. That's all there really is to it, and to be the catalyst of it and have people thanking you all night really warmed my heart I was so sure had turned to ice by now.#spnlv#spnvegas#supernatural#jensenackles#coreytaylor#jaredpadaleckipic.twitter.com/9G1NyyQBci