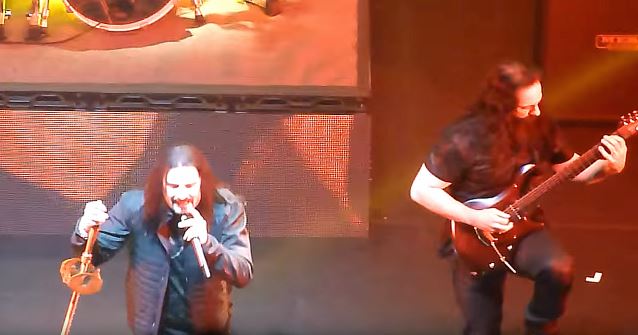 Progressive metal giants DREAM THEATER kicked off their "The Astonishing" world tour this past Thursday, February 18 at The Palladium in London, England.

A detailed review of the show is available on the Australian Musician Network web site.

In a recent interview with Rolling Stone magazine, DREAM THEATER guitarist and main songwriter John Petrucci was asked if the band was concerned about the reception to its current live show, which features them performing their new concept album, "The Astonishing", in its entirety. He said: "I'm not concerned about it, because we're being very transparent about what we're doing. By very clearly billing this as 'The Astonishing' live, and letting people know that we're playing in very special seated theaters and symphony concert halls, and we're presenting this show as a stand-alone show — that's how we wrote it, that's how we intended it — it's its own special event.

"DREAM THEATER has been touring forever; we've played the different stadiums and arenas, ice halls, gymnasiums and whatever. We wanted to make this different — we wanted to make this special. And so as long as people know that going into it, I don't think anybody is going to show up in a DREAM THEATER shirt, saying, 'Why didn't they play 'Pull Me Under'?' They're going to totally understand what we're doing."

Regarding whether DREAM THEATER will be augmenting the band at all when they play "The Astonishing" live, Petrucci said: "We're not going to be augmenting the band as far as other performers — if we were to film this for a DVD or do a really special location, that would be the instance where we'd have a live orchestra and choir. But we decided to take a lot of time and a lot of care to enlist a company that could create the visuals, so that this is as much of a visual show as it is an aural experience. Because this is character-driven and there are locations, we're going to try to make the stage almost like a transformative stage, an immersive stage, where the settings come to life, and a lot of the artwork is going to be animated. We wanted it to be the closest thing to watching a movie while the band is playing a live score, basically."