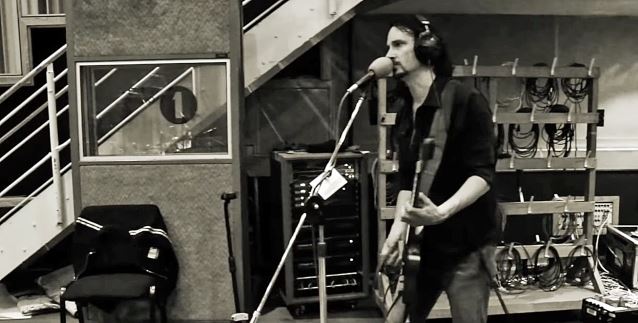 Video footage f French metallers GOJIRA performing the song "The Shooting Star", recorded at Maida Vale in London, England in August for the BBC Radio 1 "Rock Show", can be seen below. The track is taken from GOJIRA's latest album, "Magma", which was released on June 17 via Roadrunner Records. The follow-up to 2012's "L'Enfant Sauvage" was recorded at GOJIRA frontman Joseph Duplantier's Silver Cord Studio in Queens, New York.

The first demos for "Magma" were made while GOJIRA was touring the USA supporting SLAYER in 2013, and "The Shooting Star" was the track that gave direction to the album. "My instincts were always to write riffs that were very technical and challenging," Joseph told The Independent. "But one day, we were jamming and we started playing the main riff from 'The Shooting Star', and it felt like it could go either way; it could go into something super death metal or it could go into something more atmospheric. And I'm so glad we went with the latter because all of a sudden, something clicked inside me and it pushed me to approach the songs in a different way."

Duplantier explained the song's meaning, saying: "The shooting star is like a beacon or a spark in the sky that artists follow without any real reason, it's just a feeling, something we're pursuing our whole lives. It's also about losing someone dear and seeing the soul of that loved one flying in the sky."