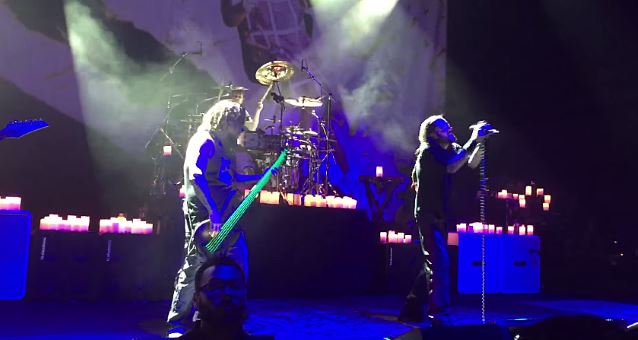 KORN is celebrating the 20th anniversary of the release of the group's debut album by performing the disc from start to finish at selected shows on its current tour itinerary.

Fan-filmed video footage of the band playing the song "Daddy" from "Korn" on Friday, March 13 at the Brooklyn Bowl in Las Vegas, Nevada can be seen below.

KORN had almost never performed "Daddy" live, since the song is about singer Jonathan Davis' painful memory of being molested as a child.

During the studio recording of "Daddy", Davis spent the final four minutes of the track sobbing in the vocal booth as the band kept playing and producer Ross Robinson kept the tape rolling. The song was only performed once live before, in 1995.

"It was just a special moment that I did not know was being recorded, for one, because Ross is a prick and kept the fuckin' tape running," Davis told Rolling Stone. Guitarist Brian "Head" Welch added, "It was one of the most intense things I ever witnessed in my life. It was so crazy; I thought he was joking at first 'cause he was really bawling and everything. But it was very, very intense."

"I'll be playing 'Daddy', but that song is just so old news to me," Davis stated about the prospect of performing the song again. "It's not going to affect me like it did back then. There was abuse there, I dealt with it, and the person who abused me is dead now. Karma took them. [Laughs] And, y'know, I've buried that. I'm just going to play the song for the people that need it, you know what I mean?"

Davis told The Pulse Of Radio that he's amazed at where KORN is after 20 years. "I'm still blown away that it's been 20 years and we're still relevant, still making music, that people kind of don't count us out as just some nostalgic act, playing casinos and fairs the rest of our lives," he said. "You know, it's, we're still doing big things, which I'm very happy. I think everybody in the band feels the same way."

The record has sold more than four million copies in the U.S. since its release.