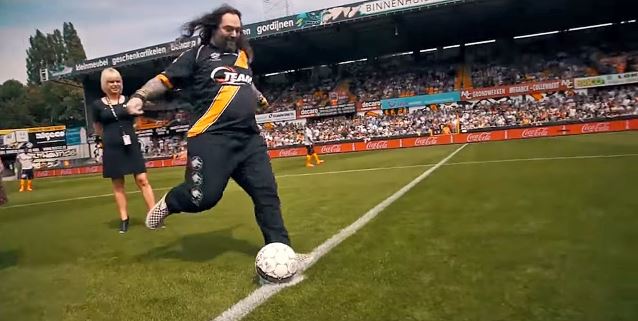 A soccer enthusiast, former SEPULTURA and current SOULFLY frontman Max Cavalera recently got to kick off a game of the Jupiler Pro League in Belgium. Check out video footage of his appearance below.

Asked what it was like watching the Brazilian soccer team's disastrous 7-1 hammering by Germany in the World Cup semi-final last year, Max told The Age Of Metal: "I went [to watch the game] with two German bus drivers, which was, like… They're nice guys, but they're German, and they had the German shirts on. After twenty minutes, they were not even commemorating [their team's win] anymore. They were just, like [puts his head down], 'Oh, man. This is bad. We feel bad for you, man.' It was kind of a crazy day. I had a show in England."

He continued: "I got really mad after the game. I wanted to burn my [Brazil soccer] shirt. But it didn't burn. That's weird, right?! Maybe it was giving me a sign that, it won't burn. Give them another chance. Russia is coming. This is the revenge. And if I was the Brazilian coach, I would make them watch that game every game before they play in the Russian World Cup [in 2018]. Watch that as a reminder of never ever let that happen again. [Laughs]"

SOULFLY's tenth studio album, "Archangel", is being released today (Friday, August 14) via Nuclear Blast Entertainment. The CD was produced by Matt Hyde, who has previously worked with SLAYER and CHILDREN OF BODOM. The cover artwork was created by artist Eliran Kantor (TESTAMENT, ICED EARTH,SODOM).