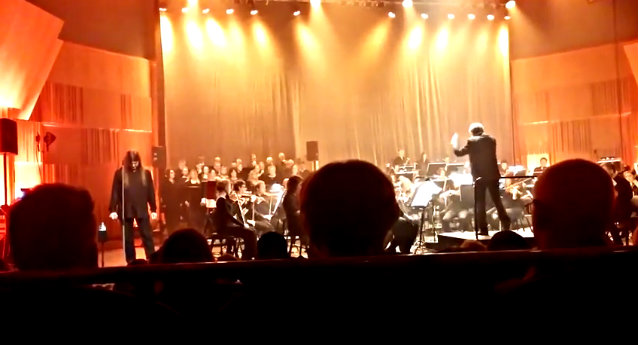 Several weeks prior to the show, Hellid stated about the prospect of once again sharing the stage with Cederlund and Säfström: "We will play 'Clandestine' where Thomas von Wachenfeldt has made orchestral arrangements and it will be the first time that I, Uffe and Orvar will be playing together since the time of ENTOMBED.

"We are extremely eager to get our heads into the project and the focus is on taking ENTOMBED to a whole new level.

"Since Gavle has opened its arms for ENTOMBED with such an opportunity give us inspiration to, once again, create something unique."

Original ENTOMBED drummer Nicke Andersson was also supposed to take part in the concert but was unable to make the gig due to touring commitments with his current project IMPERIAL STATE ELECTRIC.

ENTOMBED previously performed "Clandestine" in its entirety with the Nordic Chamber Orchestra on April 12, 2013 at Tonhallen in Sundsvall, Sweden.

"Back To The Front", the album that was recorded last year by four members of the most recent lineup of ENTOMBED — Lars Göran Petrov (vocals),Olle Dahlstedt (drums),Nico Elgstrand (guitar) and Victor Brandt (bass) — will be released this coming spring via Century Media Records under the band name ENTOMBED A.D.

Century Media Records announced last fall that the release date of "Back To The Front" — which was originally supposed to be made available under the ENTOMBED moniker — was being pushed back to early 2014 from the previously announced October 29, 2013 due to "unpredictable technical problems."

Asked in an interview with France's MetalChroniques.fr if the omission of Hellid's name from the ENTOMBED biography accompanying a promotional copy of "Back To The Front" was a mistake on the record label's part, Petrov replied: "I do not want to speak publicly about this at the moment; this is something we want to keep internal and private for now. But this is not an error in the biography. Next question?"

Hellid did not accompany the Petrov-fronted lineup of ENTOMBED when the band performed at the Manizales Grita Rock festival in Colombia in August 2013.

"Back To The Front" was recorded at Studio Bohus (ABBA, EUROPE) in Kungälv, Sweden with producer Roberto Laghi (IN FLAMES, HARDCORE SUPERSTAR). The cover artwork was painted by Zbigniew Bielak (WATAIN, VADER).